Businesses and charities were preparing for mail-related cash crunches as Canada Post made a last ditch effort to prevent the postal workers' union from beginning a series of rotating strikes late Thursday night.

However it appeared a new offer from the post office on Thursday afternoon would not head off job action as the Canadian Union of Postal Workers posted on its website a notice that rotating strikes were to begin in Winnipeg late Thursday.

"The purpose of our strike is to encourage (Canada Post) management to return to the bargaining table with a proposal that meets the needs of current and future postal workers," the union note said.

The union said it expected to meet senior post office management on Friday.

Businesses and charities were preparing for a big financial hit, while rival courier services made plans to accommodate a potential increase in customers.

"Undoubtedly, there will be a lot of money caught in the system when the strike occurs that will just be basically halted and will remain in the mail," Dan Kelly of the Canadian Federation of Independent Business said.

Kelly estimated a postal strike will cost small businesses between $200 and $250 daily.

Both the Canadian Wildlife Federation and the Toronto-based Yonge Street Mission said they, along with other charities, will be seriously impacted by a postal strike.

The Yonge Street Mission said services it provides to Toronto's poorest people are funded through donations received in the mail.

"The strike could cost the charity approximately $56,000 each week it continues," Ann Barnard Ball, Mission development officer, said in a statement.

She said 70 per cent of the Yonge Street Mission's funding comes through the mail, but she did note that nearly $500,000 was raised last year through online donations.

The Canadian Wildlife Federation said a significant portion of donations are received through direct mail campaigns but added that donations can still be made over the phone or online.

"The postal strike will impede CWF's ability to communicate with many of its over 300,000 donors," said executive vice-president Wade Luzny.

The announcement of rotating strikes came as the Canadian Union of Postal Workers continued negotiations on a new labour contract with the government-owned corporation, as the clock ticked down to the strike deadline.

"We are committed to getting an agreement and we're still working at it," Caines said from Ottawa.

In its latest offer, Canada Post said it would be willing to put a controversial short-term disability program on hold, to be reviewed by a joint union-management committee.

The proposed changes to sick leave is a key sticking point for the union.

The union gave its required 72-hour notice on Monday and will use volunteers in some provinces to deliver government assistance cheques. It plans to hold a news conference in Ottawa on Friday morning to discuss negotiations and strike activities.

The last time the union went on strike was the fall of 1997. The workers were off the job for two weeks before being forced back to work by federal legislation.

Times have changed since then. Businesses have alternatives such as electronic payments, online banking and direct deposit, but the absence of Canada Post's parcel delivery service will be felt, especially in rural areas, Kelly said.

"If you've got an online business or if you use Canada Post to ship out your goods, private couriers are going to have capacity challenges and are going to be a heck of a lot more expensive and are probably just not going to work in fairly large cross sections of the country."

Kelly also said a number of small businesses still rely on sending and receiving cheques through the mail.

"The business cheque is still a fairly affordable option for a lot of businesses."

Meanwhile, courier companies were expecting business to pick up.

Purolator said it will bring in extra staff if needed to ensure its customers get the same level of service, said Denis Roch, general manger of Purolator's Quebec and Atlantic Canada division.

"Our main priority is to try to protect our existing customers." 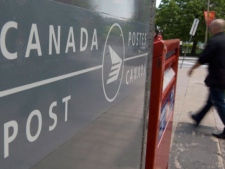 A man walks past Canada Post mail boxes in Ottawa, Monday May 30, 2011. (THE CANADIAN PRESS/Adrian Wyld)