Prostitution laws to stay in place in Ontario, as appeal prepared

TORONTO - Sex-trade workers will one day be able to legally provide for their families and work in Canada without fear of violence, advocates predicted Thursday, even as Ontario's top court kept prostitution laws in place for now.

A landmark court ruling striking down three key prostitution laws was put on hold until at least April 29, giving the federal and provincial governments time to appeal.

But she suggested Prime Minister Stephen Harper is hiding behind the courts on the contentious issue, and challenged him to "fight like a man."

"He can withdraw this appeal at any moment and change the law through Parliament," she said outside the court Thursday.

"His silence means that he does not know what to do and is not concerned about the violence against women."

Harper was asked about Bedford's comments after he made an unrelated announcement and seemed tickled.

Harper said the government supports the laws and his government looks forward to fighting on appeal to keep those laws on the books.

"We believe that the prostitution trade is bad for society," he said.

"That's a strong view held by our government, I think by most Canadians."

Even with the full weight of the federal government on the opposing side, Bedford said she will continue to fight for the safety of other women. Unspecified disabilities have left her unable to "tie people up and spank them" as much as she'd like to these days.

"The only people who benefit from this law right now are tax evaders and organized crime," she said.

"The women need to be able to call the police when they're beat up by the pimps and the johns. As it stands right now they can't. They can't press charges because they're carted to jail along with (the assailants)."

Ontario Superior Court Judge Susan Himel struck down laws against keeping a common bawdy house, communicating for the purposes of prostitution and living on the avails of the trade.

That ruling was subject to a temporary stay, and the federal and Ontario governments argued the stay should be extended, lest prostitutes from all over flood to Ontario amid an unprecedented "social experiment."

On Thursday the Court of Appeal for Ontario granted another temporary stay, meaning the laws will remain on the books until at least April 29. It puts pressure on the government to expedite the appeal.

Justice Minister Rob Nicholson said the government was pleased with the stay, saying there are "considerable" harms that flow from unfettered prostitution.

"These laws are necessary to protect not only the individuals...but the communities as well."

"If the activity is carried on on the street and police are unable to intervene, this can have a devastating effect on communities and neighbourhoods."

Nikki Thomas, the deputy director of the Sex Professionals of Canada, said when -- not if -- Himel's decision is affirmed by higher courts and comes into effect, it won't mean that prostitutes will ply their trade on playgrounds and bring sexual anarchy to the streets.

"All that you'll see is one of the most marginalized groups in the country will finally have the opportunity to take care of their own safety," she said outside court.

In his ruling, the Appeal Court judge said it would be harmful to the public interest to have the lower court ruling come into effect immediately.

"I am satisfied that it is in the public interest that the judgment be stayed for a relatively short period to permit appellate review of the decision," Justice Marc Rosenberg wrote.

A current schedule worked out between lawyer Alan Young, who represents the sex-trade workers, and the government lawyers suggests an appeal will be heard in the summer. But Young said he is ready to argue the case tomorrow and urged the governments to press ahead so the appeal can be heard before the stay expires.

Young had argued because the lower court judge found the laws are "contributing to the danger faced by prostitutes," the laws needed to be off the books right away.

"It's business as usual for the government, which basically means a bad law will continue to be under-enforced," Young said Thursday.

Prostitution was not illegal in Canada, but the court struck down three provisions that criminalized most aspects of prostitution, however, Criminal Code offences dealing with people under 18 are not affected. 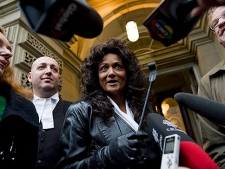