TORONTO - It was a day of unprecedented chaos in downtown Toronto as roving bands of G20 protesters set fire to police vehicles and smashed windows Saturday despite a $1-billion security tab and thousands of police at the ready.

A core group of militant protesters, disguised with dark bandanas, wearing black bike helmets and using what's referred to as a Black Bloc tactic, remained at large after their campaign of violence. Still, police vowed to bring them to justice.

Police in riot gear marched through city streets for hours, pounding their shields in warning as they tried to restore order in a city under siege.

The violence came as leaders of the world's G20 nations met behind the steel and concrete barrier that has earned the city the moniker "Fortress Toronto."

With protesters seemingly running free through the streets, Toronto Mayor David Miller defended how police responded to the splinter groups that broke off from a larger, peaceful protest march.

"A small group of people essentially runs in a deliberate pattern away from that demonstration, a very difficult task to immediately redeploy everybody," Miller said.

"The police have to protect the site where the G20 leaders are."

That appeared to be the strategy, as police held their lines just north of the G20 security zone, metres away from a chaotic scene that saw bank windows smashed with hammers and storefronts destroyed by hurled rocks.

When reinforcements did arrive the protesters were long gone, leaving officers the task of driving back non-violent demonstrators.

"Our streets!" the protesters chanted in response.

As night fell hundreds of protesters mounted a futile campaign. Chanting "To the fence," the group made several attempts to approach the security barrier, but was blocked by riot police at every turn.

Earlier, a newspaper photographer was shot with a plastic bullet in the backside, while another had an officer point a gun in his face despite identifying himself as a member of the media.

The chaotic situation saw Toronto police use tear gas for the first time in the city's history, said Chief Bill Blair, who added the city has never seen that level of violence in its streets.

Some 5,100 officers from forces across the province have been tasked with protecting the summit. Security has been pegged at $1 billion.

A thick plume of dark grey smoke hovered above the city's financial district at Bay and King streets after three police vehicles were set ablaze.

When the skies cleared, the damage was laid bare -- at least one cruiser was completely gutted by fire and the other two badly scorched. Graffiti was scrawled on bank towers.

Hours later another police car was set on fire -- and then another.

"Free speech is a principle of our democracy, but the thugs that prompted violence earlier today represent in no way, shape or form the Canadian way of life," spokesman Dimitri Soudas said in a statement.

Miller made his remarks from the Direct Energy Centre, where international reporters covering the summit are stationed.

Four massive screens suspended from the ceiling showed a live shot of Toronto's silhouetted cityscape dominated by the CN Tower, but not a sign of the chaos in the streets.

"That's what they're showing in here?" he wondered aloud.

Police said more than 100 arrests were made, and that tally was expected to grow through the night.

The hospitals on University Avenue, where the march began, and the Eaton Centre shopping mall were put under lockdown. There were reports of looting at the mall, a popular tourist attraction. Downtown subway lines and commuter trains were shut down at the request of police at the height of the violence.

At the Ontario legislature riot police formed a line, three deep and began moving forward en masse to push back the crowd of a few hundred people.

Several times a group of about seven or eight officers would suddenly break out of the line, grab one of the protesters, handcuff them and drag them back behind the line.

The group chanted "shame" and "the world is watching," while police told them it was an unlawful assembly.

Throughout the city officers had corralled groups of protesters, but there was no sign of the balaclava-clad protesters who caused the carnage.

That renegade group of about 50 people left a trail of destruction down Queen Street West in the heart of the city as they targeted symbols of power, authority and capitalism.

Bank windows were smashed with hammers. Rocks were thrown through several Starbucks coffee houses. TV vans were smashed. Mailboxes were flipped and chucked at windows.

One protester threw a pickaxe through the window of a bank tower like a tomahawk as his posse roared its approval.

"Bomb the Banks," was spray painted on walls.

Another protester was seriously injured after suffering a head injury and was carried away by others.

Store owners were moved to tears on the sidewalks outside their vandalized shops, and parents hurried away carrying crying children.

An eclectic group of about 4,000 people ranging from greying seniors to families with strollers and tattooed hipsters had gathered at 1 p.m. to protest the summit. Things turned violent about 90 minutes later when the smaller group dressed in black broke away.

Black Bloc is often mistaken for an organization, but it's actually a protest tactic according to websites devoted to the method. Protesters dressed normally infiltrate peaceful demonstrations, then change into black clothing and cover their faces in balaclavas or ski masks.

The uniform look makes it difficult for police to identify who perpetrated an act of violence, such as smashing a window or spray-painting a building. Protesters can change back into regular street clothing and go unnoticed by police.

James Ruehle, a 49-year-old contractor from Pickering, a half hour's drive from Toronto, saw the burning of the three police cruisers.

Ruehle was stopped in his truck at the lights at the corner of King and Bay streets in the city's financial district as the protesters approached.

Three police vehicles zipped past the line of traffic into the intersection, where they stopped with lights flashing. A group of about 20 to 30 police then began to congregate but an officer Ruehle thought was a police captain ordered them back.

"The cop was yelling at them 'Back up!' 'Put your batons down!"' said Ruehle.

The police in the cars, he said, then amazed him by backing off, leaving the cruisers running in the middle of the intersection with their lights flashing and doors open.

"It was like an invitation G(to the protesters)," said Ruehle.

"One kid with a helmet and a black suit jumps on the trunk lid of the police car and jumps up and down like a madman."

Ruehle said three or four others in similar garb quickly joined in. 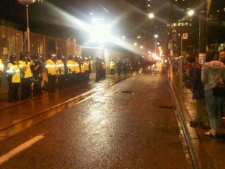 Protesters gather at the security fence as a line of police officers protect the wall by forming a solid line.(David Johnson/MetoWe) 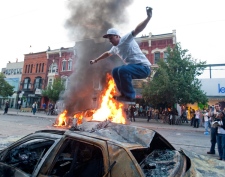 A protester jumps on a burnt out car as a police car burns in the background during an anti-G20 demonstration Saturday, June 26, 2010 in Toronto. (THE CANADIAN PRESS/Ryan Remiorz) 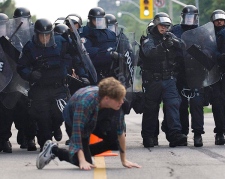 A protester crawls as he is chased by police officers during G20 demos in Toronto on Saturday, June 26, 2010. (THE CANADIAN PRESS/Adrien Veczan) 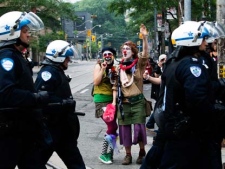 Activists and protesters heckle riot police while marching along the streets of downtown Toronto during the G20 Summit on Saturday, June 26, 2010. (Nathan Denette/THE CANADIAN PRESS) 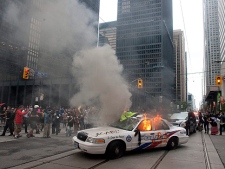 A police car burns after G20 summit protesters set fire to it in downtown Toronto on Saturday, June 26, 2010. (THE CANADIAN PRESS/Chris Young) 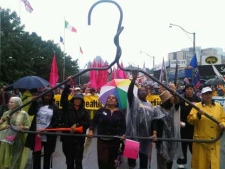 A group of women march down University Avenue on June 26, 2010, carrying a large hanger in a symbol of their fight for abortion rights.