They say the puppies disappeared from a home (near Main Street and Danforth Avenue) around 3 p.m. Friday.

The eight-week-old English Bulldogs are described as light brown and white.

A woman who claims to be the owner said she and the puppies were playing outside when she went indoors for a few minutes.

She returned to find them missing.

She said the dogs were bred for herself and friends, and were not for sale. 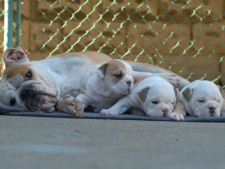 Three English Bulldog puppies who were stolen from an east-end backyard are pictured here with their mother.