Rays keep up home dominance over Jays with 3-2 win 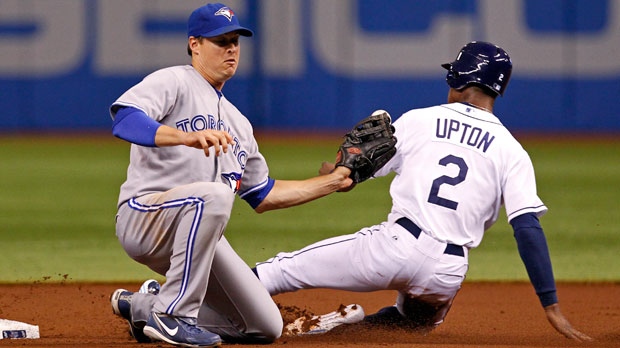 Cobb pitched seven solid innings, helping the Tampa Bay Rays keep up their home dominance of Toronto in a 3-2 victory over the Blue Jays on Wednesday night.

"That was the best curve I've seen all year from any of our pitchers," Rays manager Joe Maddon said. "To both righties and lefties, it was quick, it was hard, there was no hump in it. It was absolutely great, and I think that set up the whole game for him."

Cobb (6-8) allowed one run and five hits, striking out seven. The right-hander was coming off a start last Wednesday when also gave up one run over seven innings in a 4-1 victory against Oakland.

"The curveball was probably the best it has been all year," Cobb said. "I was able to throw it for a strike when I wanted, out of the zone when I wanted, and it had some good bite to it."

The Rays clinched their 16th consecutive home series win over Toronto by winning the first two games of the three-game set. The longest such streak in AL history is 19, held by the New York Yankees against the St. Louis Browns from 1946-51.

After Joel Peralta fanned all three batters he faced in the eighth, Fernando Rodney got his 34th save despite giving up David Cooper's one-out, solo homer in the ninth.

Evan Longoria went 0 for 4, including three strikeouts, in his second game back as the Rays' designated hitter after sitting out 85 games because of a partially torn left hamstring.

The Blue Jays did get some good news postgame about injured slugger Jose Bautista, who had an MRI exam earlier in the day on his injured left wrist.

Toronto manager John Farrell said Bautista has been cleared to take dry swings and hit off a tee on Monday.

"At that point, it's still proceed with his tolerance to any kind of discomfort," Farrell said. "This will be a cautious approach and we'll monitor it daily. Hopefully with some additional time down, he'll get back into the swing of things. Looking forward to getting him back, making progress towards eventual activation."

Bautista has been on the disabled list since July 17. The MRI exam showed improvement, but some inflammation in one small spot.

Carlos Villanueva (6-2), who rejoined the team Tuesday after tending to a personal matter, gave up three runs and six hits in six innings for the Blue Jays. Toronto has lost eight of 11, scoring just 29 runs over the stretch.

"We seem to struggle for some reason playing in this ballpark." Villanueva said.

B.J. Upton hit an RBI double and scored when Longoria grounded into a double play, and Jeff Keppinger hit a run-scoring single as the Tampa Bay took a 3-1 lead during the third.

The Blue Jays went ahead 1-0 on Edwin Encarnacion's sacrifice fly in the third.

Longoria struck out with a runner on a second and two outs in the first. He had one hit in three at-bats, and a sacrifice fly, in his return in Tuesday night's 4-1 win over the Blue Jays.

Notes: Rays DH Luke Scott (oblique) could be ready to start a minor league rehab assignment in the next few days. ... Blue Jays 3B Brett Lawrie missed his fourth consecutive game because of a rib cage injury. Lawrie, who had an MRI exam Tuesday night that showed some oblique inflammation, said he feels a lot better. ... Rays RHP Jeff Niemann (broken right fibula) allowed one run over 2 2-3 innings in his first start for Class A Charlotte. ... Toronto RHP Drew Carpenter, designated for assignment last Friday, has elected to become a free agent.