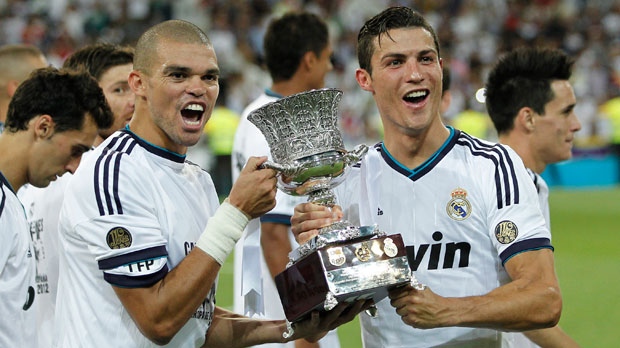 MADRID, Spain - Real Madrid took advantage of quick goals plus an early sending off to beat 10-man Barcelona 2-1 Wednesday to win the Spanish Super Cup on away goals after the two-legged tie ended 4-4.

Gonzalo Higuain and Cristiano Ronaldo put Madrid in control with goals inside 23 minutes at the Santiago Bernabeu to take advantage of Barcelona's poor start.

Adriano was red carded for tripping up Ronaldo as he was set to race clear on goalkeeper Victor Valdes in the 28th to further thwart the visitors' hopes.

But Lionel Messi curled home an exquisite free kick before halftime of another thrilling match between the Spanish giants with the league champions hanging on to beat the cup holders for the title.

Alex Song and Luka Modric both debuted for their clubs, with Madrid's first victory of the season in all competitions helping it recover from its worst start for nearly 40 years and edging it ahead of Barcelona 88-87 in all-time wins between the "clasico" rivals.