A home in Richmond Hill has been destroyed following a fire Tuesday evening.

Crew were called to the home on Houseman Crescent, in the Bathurst Street and Major MacKenzie Drive area, at around 6:30 p.m.

Firefighters said the blaze started in the garage before quickly spreading to the roof of the house.

Helped by strong winds, the fire then spread to a neighbouring house. Firefighters were able to contain the flames to the attic of the second building.

“We had about 30 firefighters on scene very quickly,” Richmond Hill Fire Chief Steve Kraft told CP24 at the scene.

“As you can see, they did a pretty good job containing (the fire) to just the roof (of the second house),” Kraft said. “It could have been a lot worse.”

Two homeowners have been taken to hospital, as a precaution, with minor injuries.

The cause of the fire remains under investigation, Kraft said. 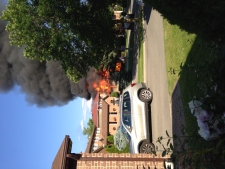 A fire at a house on Houseman Crescent in Richmond Hill is scene in this photo on Tuesday, June 18, 2013. (Jamie McCarthy) 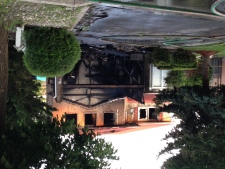 A house destroyed by fire on Houseman Crescent in Richmond Hill is seen on Tuesday, June 18, 2013. (CP24/Jackie Crandles) 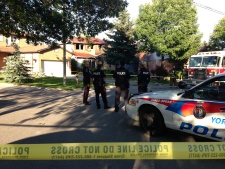 Police officers are seen on Houseman Crescent in Richmond Hill after fire destroyed one home and damaged another on Tuesday, June 18, 2013. (Brishna Saraj)