Rob Ford takes the stage in 'The Nutcracker Ballet'

Bringing a whole new meaning to the term ‘300 pounds of fun', Mayor Rob Ford made his stage debut in the ‘Nutcracker Ballet' Saturday afternoon.

In what was a non-speaking and non-dancing role, Ford still managed to put on a show as a very animated cannon doll.

It was Ford's second stage credit, after making a brief appearance in ‘Thomas the Tank Engine' this spring.

For a full video use the player to your right. 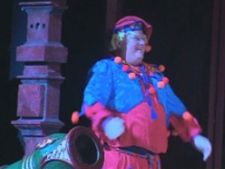