TORONTO - Teen star Selena Gomez says she shed quite a few tears over the weekend as she shot the last scenes for her hit TV show "Wizards of Waverly Place."

"It was bittersweet. ... I obviously cried a lot," Gomez said in a telephone interview Monday from Los Angeles. "It was really, really hard."

Gomez became a star playing Alex Russo on the Disney Channel smash about three siblings who are training to be wizards in New York City.

Over the weekend, she tweeted a photo of herself arm-in-arm with co-stars David Henrie (Justin Russo) and Jake T. Austin (Max Russo) heading to set for the last time.

"They called us to set and normally they call us separately ... that morning they're like, we want to bring you all in together," said Gomez. "I just held on to them. It was really depressing."

Gomez said the cast had a party Sunday where they danced, watched a blooper reel and said their goodbyes.

She even received a special souvenir.

"I took my wand that I've cast my spells (with) for the last four years," Gomez said.

"It's in a little box in a frame, so hopefully I'll be able to hang it up in my house ... they gave it to my brothers and I."

On Monday morning, the reality of her post-"Wizards" life was beginning to sink in.

"It's very weird to know that I won't have my dressing room to go back to tomorrow morning," said the 18-year-old Texas native.

She has more than a few upcoming projects to help with the transition.

On June 19, Gomez will host the MuchMusic Video Awards in Toronto, where Lady Gaga, the Black Keys, Avril Lavigne and Bruno Mars are scheduled to perform. She'll follow in the footsteps of other former Disney stars who took on MMVAs hosting duties, including the Jonas Brothers and Miley Cyrus.

The singer/actress says she became a fan of MuchMusic while shooting two movies in Toronto and was flattered to be asked to participate in this year's street bash.

And while she's rumoured to be dating teen heart-throb Justin Bieber, Gomez admitted that she also carries a bit of a torch for Mars.

"I'm obsessed with Bruno Mars, I really think he's extremely talented," she said. "I kind of have a crush on him."

A few days after her hosting duties, the latest Selena Gomez and the Scene album, "Otherside," will drop and the singer will head out on her first tour.

If that isn't enough to satisfy fans, the star's latest movie "Monte Carlo" -- co-starring Cory Monteith of "Glee" fame -- is due to hit theatres July 1.

Gomez said she wants to continue to make music and movies, but feels like she has something to prove on the acting side now that "Wizards" is behind her.

"I feel as if I have to gain credit with new audiences," she said.

After doing comedy for a few years, the actress says it would be nice to try something different.

Still, many teen stars have been criticized for sexing up their images after leaving wholesome TV shows and Gomez seems wary of alienating her rabid tween supporters.

"I would never want to do anything to make my fans uncomfortable because they are extremely loyal and they've been with me for the past five years," she said.

"If anything, I just want to choose roles that they can all see and all kind of grow with me, if that makes sense."

Season 4 episodes of "Wizards" are airing on Family Channel. The network is planning a Selena Gomez marathon on June 15. 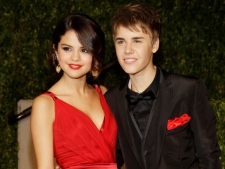