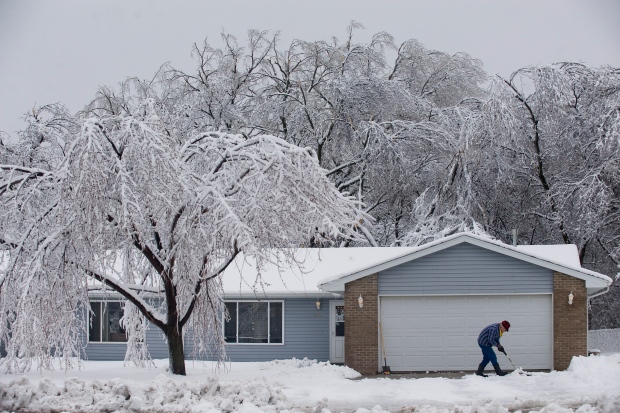 SHUQUALAK, Miss. -- A strong spring storm that socked the Midwest with ice and heavy, wet snow made its way east, raking the South with tornadoes Thursday, with three deaths blamed on the rough weather and thousands of people without power.

At Contract Fabricators Inc. in Kemper County, where authorities said one person died and another was injured, bent pieces of tin hung from the heavily damaged building. A tractor trailer was twisted and overturned. Debris from the business was strewn through the woods across the street.

Tabatha Lott, a dispatcher in Noxubee County, said there were "numerous reports of injuries" in the town of Shuqualak, though it wasn't immediately clear how many. Flynn also said there are reports of damaged buildings and many power outages.

The T-shaped system first swept across the nation's midsection Wednesday night and pummeled portions of Missouri, where the National Weather Service said Thursday that an EF-2 tornado appears to have damaged dozens of homes in the St. Louis suburb of Hazelwood. That category of tornado generally packs winds of 113 to 157 mph.

Derek Cody, an amateur storm chaser who works at East Mississippi Community College in Scooba, just south of Shuqualak (pronounced SHUG-a-lock), told The Associated Press that he drove north to the small town to try to catch a glimpse of the tornado.

He said he got out of his car on U.S. 45 just as the twister was approaching the highway, only to be hit by a strong gust of wind moving into the storm that almost knocked him over.

"I kind of sat there and hoped it would cross right in front of me," Cody said. "It was just a black mass that moved across the road."

Cody said that the centre of Shuqualak, an eastern Mississippi town of 500 people, was unaffected. But he said a gas station and about 10 or so houses west of the town centre were damaged. He said one house was "completely flattened" with debris blown across the road.

As the system was moving through the Southeast, high winds knocked over trees and power lines in rural west Alabama and eastern Mississippi. About 50 school systems in central and north Alabama sent students home early, and a few government offices and businesses also closed early.

In Shuqualak, Kathy Coleman, 57, said she was outside her home signing for a delivery of her dialysis medication when the deliveryman hustled her back in to the house. Coleman said she, the deliveryman and her housekeeper huddled in the bathroom as the storm hit.

The line of severe storms was trudging east toward Georgia, where the world's best golfers are playing in the Masters at Augusta National. The weather was warm and sunny on the first day of the four-day tournament but severe storms were forecast overnight.

Behind it in Missouri and neighbouring Illinois, crews with the weather service still were assessing whether tornadoes were to blame for other damage, meteorologist Mark Fuchs said. Missouri Gov. Jay Nixon declared a state of emergency shortly after the storm swept through the eastern part of Missouri, bringing hail, up to 2 1/2 inches of rain and strong winds.

Utility workers scrambled to restore power to more than 23,000 still-affected Missouri homes and businesses. One utility worker for Ameren Missouri was electrocuted while doing electrical work to repair damage, the company said. The company says he was taken to an area hospital but did not survive.

In the upper Midwest, thousands of homes and businesses also lost power because of heavy wet snow, ice and wind in the past couple of days, while rain and snow raised flooding concerns in various areas of the Midwest. A suspected tornado caused damage in Arkansas.

Authorities said Thursday that flooding from heavy rain and melting snow has sent some rivers over their banks and has closed roads in parts of Michigan's Lower Peninsula.

A third death was reported in the Nebraska Pandhandle, where a woman perished Tuesday when she tried to trudge through a blinding snowstorm from her disabled car to her house a mile away.

On Wednesday, seven members of the Sullivan, Mo., municipal airport board were gathered at the airport Wednesday night for a meeting. A member noticed what looked like funnel clouds over the 7,000-resident town about 65 miles southwest of St. Louis. Then, a wind-blown pickup truck then scooted by -- without a driver. The gust was clocked at 101 mph.

"The city administrator said his ears were popping, then all of a sudden the building shook and the windows shook," board member Larry Cuneio said. "I'm the street commissioner and I've seen wind do a lot of things, but never anything like this."

Across the Mississippi River in Alton, Ill., Dave Grounds was watching TV when he heard the rain suddenly intensify, followed by winds that he said had "incredible resonance."

"That's when the house started shaking violently, like it was grabbed by both sides," said Grounds, a judge for Madison County's juvenile court. "I thought it was an earthquake, and that's when things started collapsing."

Two large trees -- one oak and the other ash, each a century old -- toppled onto one end of his house of 43 years, caving in his bedroom and crushing two of his vehicles.

"Electricity lines came down and started sparking like it was the Fourth of July, and the whole house filled with smoke," said Grounds, 64.

At least eight homes were damaged in the St. Louis neighbourhood known as the Hill, famous for its Italian heritage and restaurants. Mobile homes were blown over in parts of Franklin and Washington counties, not far from St. Louis.

Fuchs said the storm, which affected numerous states, was the result of a clash of warm and cold air -- typical for spring.

A tornado with winds of 111-135 mph hit Botkinburg in north-central Arkansas on Wednesday and injured four people, National Weather Service forecasters said Thursday. It was rated as an EF-2 storm on a scale measuring tornado severity. EF-5 is the highest. Wednesday's storm was 400 yards wide at its peak

In South Dakota, snow and ice shut down several roads, including Interstate 90 for a time.

The weather service said the system could extend into flood-prone southeastern North Dakota, where about 3 to 5 inches of snow is expected through late Thursday.

"Any additional precipitation at this stage in the game is not necessarily a good thing," said Peter Rogers in Grand Forks.

In Minnesota, the snowstorm that made travel difficult Thursday across parts of Minnesota heaped more headaches on the southwest corner of the state, where communities are still struggling to restore power following an ice storm earlier in the week. Officials said it may be early next week before electricity is restored in the southwest.