About 1,200 residents from 700 units are homeless after firefighters managed to bring a six-alarm blaze in a downtown highrise under control the day after it first started.

Flames quickly tore through the unit and eventually spread to two other units in a blaze one official says is the hottest firefighters have seen in their careers.

Up to 14 people, including three firefighters, were taken to hospital. Three people are listed in serious condition.

At one point up to 27 fire trucks and as many as 150 firefighters were at the scene.

Fire Chief William Stewart says the Ontario fire marshal, structural engineers and electrical engineers trying to figure out the level of damage and when residents can return.

Officials said Saturday afternoon it could be several days - at least until Monday -  before many are allowed back.

Heavy black smoke could be seen billowing from the balcony of an apartment in the building on Friday.

Stewart says there was a high level of combustible materials in one apartment and some neighbours said a hoarder was living in the unit.

Division Commander Bob O'Hallarn says doors in the hallway of the 24th floor are scorched and other items have melted outside the unit where the fire started.

Residents are staying in the Wellsley Community Centre while Toronto Community Housing is working on options for those displaced by the blaze – but it could be days or longer until they're allowed to return.

Toronto Animal Services is also on scene helping tenants deal with their pets. 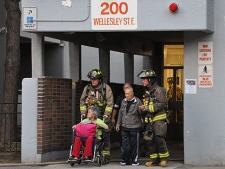 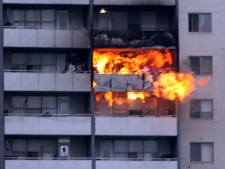