Strains of "O Canada" mingled with traffic noise as thousands of people paid their respects to a soldier gunned down at the National War Memorial this week as he made his final journey back to his hometown of Hamilton on Friday.

The motorcade carrying the body of Cpl. Nathan Cirillo left the funeral home in Ottawa in the early afternoon for the six-hour trip along the Highway of Heroes, a route that frequently saw the repatriation of soldiers killed in Afghanistan.

As in the past when Canadians holding supportive signs or waving the Maple Leaf filled overpasses to show their respects to slain soldiers, crowds gathered along the stretch of Ontario's Highway 401 between Canadian Forces Base Trenton and Toronto.

As many as 500 people jammed one overpass near Kingston, Ont., breaking into a rendition of the national anthem as the procession sped past below. Two hydro trucks used their buckets to form a heart with a Canadian flag in the middle.

Among those on hand at another spot in Port Hope was Gwen Barron, in her 70s, of Roseneath, Ont.

"I've been here really every time a soldier's come home and this one's important," Barron said.

"I feel so sad. They deserve our appreciation. How else will their families know we care?"

Hamilton police and members of Cirillo's regiment, the Argyll and Sutherland Highlanders, accompanied the casket.

Crowds who had waited for hours, ranging from veterans who asked people to "remember to take your hats off" to people with young children in tow, lined the route through Hamilton as the procession drove through.

They applauded and sang the national anthem, waved Canadian flags and took video with cellphones as the motorcade made its way along the main street and past Hamilton City Hall.

Cirillo, 24, the father of a young son and described as a happy-go-lucky, always smiling man who loved dogs, the outdoors and fitness, is to get a full regimental funeral on Tuesday.

He and his partner, Cpl. Branden Stevenson, were on ceremonial sentry duty at the war memorial on Wednesday when a gunman shot him in the back before storming into the Centre Block on Parliament Hill.

The gunman, identified as Michael Zehaf Bibeau, 32, was shot dead, apparently by Kevin Vickers, the sergeant-at-arms of the House of Commons. While a motive remains unclear, authorities have said Zehaf-Bibeau was trying to get a passport to travel to Syria and may have had some contact with a known Islamist extremist.

Scores of people turned out at the war memorial on Friday afternoon as it re-opened for the first time since the tragedy. Prime Minister Stephen Harper was present, shaking hands with those in attendance.

Books of condolence for Cirillo have been set up in Hamilton and Ottawa and there's been an outpouring of supportive messages and grief at his home, his regiment and online.

Visitation for the soldier is to be held at a funeral home in Hamilton on Sunday and Monday, with the funeral to be held at Christ's Church Cathedral at noon on Tuesday.

In a statement read by a member of Cirillo's regiment, his family welcomed the support from across the country, and gave thanks to those who came to his aid after he was shot.

"There are no words to express the sadness that has fallen upon us all," the statement said. "We take comfort in knowing Nathan has done our country proud.

"The support of the nation at this devastating time provides a measure of comfort and helps make this almost bearable."

The family also talked about Cirillo's love of the army.

"He had a strong and unwavering devotion to duty. He understood what it meant to sustain freedom. He was fearless. Nathan would have done his duty even if he knew this tragedy was coming."

The killing was the second of a soldier this week.

On Monday, Warrant Officer Patrice Vincent, 53, was fatally injured when a man identified as Martin Rouleau used his vehicle to run him and a colleague down in a parking lot of a federal building south of Montreal.

Rouleau, 25, fled the scene but was later shot dead after a pursuit in which his car rolled over. Friends said he had become increasingly radicalized.

In a statement requesting privacy, the Vincent family described the 28-year soldier as a well-liked "bon vivant" whose passing would leave a "huge void" in their hearts.

"Serving, for him, was his way of making a difference in our world," the statement said.

"To the family and relatives of Cpl. Nathan Cirillo, know that we share your pain and our hearts go out to you. Our thoughts are also with the Couture-Rouleau family, who are going through difficult times."

Vincent's funeral is to be held on Nov. 1 at the Longueuil Cathedral in Longueuil, Que.

A fundraising campaign for the families of both soldiers had almost reached its goal of $200,000 -- including $100,000 from the country's five big banks -- as of Friday afternoon. The Halifax Chronicle Herald was also selling a well received cartoon related to Cirillo's killing, with proceeds going to charity.

On Thursday, the country's political leaders made a show of unity in light of what was branded an act of terror and security at military bases has been stepped up.

- With files from Diana Mehta in Port Hope, Ont. 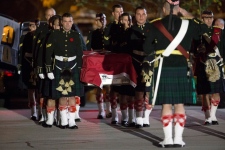 The body of Cpl. Nathan Cirillo is carried by his fellow soldiers into the Dermody-Markey Funeral Home in Hamilton, Ont., on Friday, Oct. 24, 2014. (Peter Power / The Canadian Press) 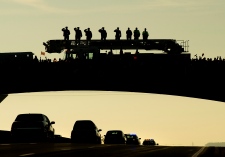 Supporters pay tribute as the body of Cpl. Nathan Cirillo is transported in a hearse from Ottawa to Hamilton, along the Highway of Heroes in Port Hope, Ont., on Friday, Oct. 24, 2014. (The Canadian Press/Nathan Denette) 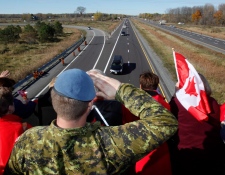 A Canadian soldier salutes the hearse carrying the body of Cpl. Nathan Cirillo on the Veterans Memorial Highway in Ottawa on Friday, Oct. 24, 2014. (Patrick Doyle / THE CANADIAN PRESS)

Canadian reservist Cpl. Nathan Cirillo is shown in an undated photo taken from his Facebook page.