Social media and youthful antics took center stage Friday at the NDP leader's convention as delegates flooded hashtags, danced in a flashmob, wore colourful wigs and marched to the beat of drums.

The NDP prides itself on its ability to attract young voters to its campaigns and the convention adequately reflected their young demographic and the way youth communicate political messages.

The hashtag the party pushed #ndpldr was flooded with messages from supporters of all camps, rendering it nearly impossible to follow for thoughtful discussion. Still, the high amount of traffic it garnered made it one of the top trending topics on Twitter in Canada for most of the day. The party also pushed delegates to use the #Layton hashtag during the evening tribute to late NDP leader Jack Layton.

Their tactics worked better than expected. The names of each candidate were also trending during their time up on stage as well as #Layton and the words "Jack Layton" ahead the tribute which lasted about an hour and a half.

CP24.com broke the news to Ashton, shortly after she was done her speech.

When asked what she planned to do about the news, she laughed and said, "I'm going to tweet about it of course!"

"This is where it's at and we used it (in our campaign) to the max," she said. "This is how my generation expresses issues that matter to us."

Ashton, who is the youngest candidate on the leadership ballot, said it's not only about using social media, but also the language youth use.

"We are a progressive party that wants to engage young people and we need to take on this new way of doing politics."

However, she was quick to say that no amount of social media can reach out to young and old people alike the way a personal meet and greet can.

"We should never forget how important the connections are when you meet person to person," she said.

Mike Fancie, the social media coordinator for Tom Mulcair's campaign, agrees with Ashton wholeheartedly, saying the next steps in politics is to make a real effort to bring the party's success on social media into a real-life setting.

"Tweetups" is one way to do this, he said, bringing people together who had previously only met on Twitter.

"Everyone wears a nametag with their Twitter handle on it," he explained.

"It's all part of a wider picture," he continued. "You need to take that momentum online and turn it into real action."

Fancie who turned 24 years old on Friday, came on to the campaign to help out 58-year-old Mulcair who was new to Twitter until last August.

Though he admitted there was a learning curve at first as Mulcair got used to the idea of taking his campaign online, it was no time at all before the candidate got a hang of it all.

"My proudest moment was when he suggested, ‘Hey, this would make a good tweet!'"

But Mulcair's camp went a lot further than using social media to rev up the crowd at the convention. The front-runner took the stage as his large team of supporters ushered him through the audience in what ended up being the grandest entrance of the afternoon.

Though rival Peggy Nash was greeted by a flashmob dance just before she walked through the convention doors, Mulcair's camp drew even bigger cheers with a uptempo drumming band that energized the entire room.

"I really liked the drums, it felt like a rally," said Dave Scrivener, one of several young media consultant on Nash's campaign.

"But I liked our flashmob. It was more aerobic," he added with a laugh.

Scrivener and fellow young Nash supporters were consistently the loudest crowd in the room, always making sure all eyes were on them, whether on the convention floor or in the hallways of the Metro Toronto Convention Centre.

Scrivener said Nash's young campaign camp is a reflection of her outreach in her Parkdale community to youth, particularly young women.

"It all started with her political campaign last year," he said. "She wanted to make sure young people weren't just volunteers but they were active in all parts of the process."

Twitter and Facebook were key components of the campaign, he said, and the camp made conscious efforts to use social media to get their message across and attract new votes from people outside their immediate network.

"Twitter is an extension of the floor," he said. "There are way more voters out there. It's fast and it's furious."

But like everything fast and furious, Scrivener warns of the potential social media has to turn some voters away.

"Just like the way the #ndpldr hashtag was flooded, we have to become a lot smarter about the way we are affecting social media," he said. "It can become overwhelming." 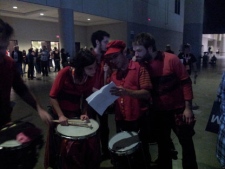 Drummers prepare to perform at the NDP leadership convention in Toronto on Friday, March 23, 2012. (CP24/Sandie Benitah) 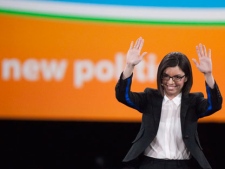