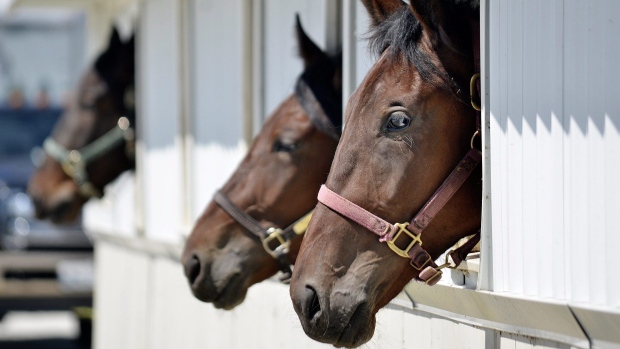 Horses watch warmup laps from a barn as they wait for the start of harness racing at the Coverse Fairgrounds in Converse, Ind., on Wednesday, June 8, 2016. The $1-million Pepsi North America Cup will be run Aug. 29 at Woodbine Mohawk Park. The race, Canada's richest harness event, was originally set for June 20 but was postponed last month due to the COVID-19 pandemic. THE CANADIAN PRESS/-AP-Jeff Morehead/The Chronicle-Tribune via AP)

The race, Canada's richest harness event, was originally set for June 20 but was postponed last month due to the COVID-19 pandemic. Harness racing continued at Mohawk Park without fans before ultimately being suspended in March due to the outbreak.

The COVID-19 pandemic also forced Woodbine Entertainment to postpone the April 18 start of its thoroughbred card at Woodbine Racetrack in Toronto.

Racing at both venues will be conducted without fans in the stands.

On Thursday, the Ontario government gave horse-racing the green light to resume - again without spectators - as early as Tuesday.

Getting horses back on the track and racing so quickly would certainly have be an ambitious undertaking for Woodbine Entertainment. But the government's decision did allow the organization to stick with its original plan of having both disciplines up and running by June 5-6.

“It's good timing for us but there's just so many considerations to take into account,” he said. “We had to see what every other harness track in North America was doing and when and so it wasn't an easy process.

“It was more than just Mohawk picking a perfect date . . . it's a big factor what other tracks are doing. We spent a lot of time trying to figure out the best date for this.”

Captain Crunch, driven by Scott Zeron of Oakville, Ont., won last year's Pepsi North America Cup in a track and Canadian record time of one minute 47.2 seconds. After surging into the lead in the stretch, Captain Crunch held off a spirited late push from Bettors Wish to register the victory by three-quarters of a length.

The inaugural US$1-million Mohawk Million is also scheduled to go on its original date of Sept. 26 at Mohawk Park. The race for two-year-old trotters will headline a card that also includes the $850,000 Metro Pace and $550,000 Shes A Great Lady.

“We're so excited about it,” Lawson said. “We didn't want to run the North America Cup and Mohawk Million on the same night.

“It would've taken away from one or the other and that's not fair to either.”

This report by The Canadian Press was first published May 19, 2020.