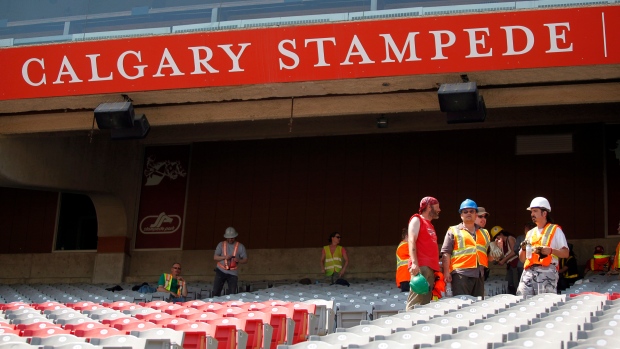 CALGARY - It survived the Great Depression, the Second World War and a massive flood seven years ago, but the Calgary Stampede has become a casualty of COVID-19.

The Calgary Stampede's board of directors announced Thursday the cancellation of the world-famous exhibition and rodeo this year because of the novel coronavirus.

“It's hard but it's the right thing to do,” said Stampede president and board chairman Dana Peers.

“As you can imagine, it's very difficult to be here to share this announcement. As a community celebration, the cancellation of our annual event comes with our community, public health and safety front of mind.”

The Stampede first started on an annual basis in 1923.

It had been held every year since then, including when Calgary and other communities in southern Alberta were devastated by flooding in 2013. The Stampede grounds were under water but frantic work was done so it could go ahead.

“I remember standing at this podium seven years ago and talking about how we only had two weeks - come hell or high water the Calgary Stampede would go on,” said Calgary Mayor Naheed Nenshi.

“This is different. This pandemic, this virus, this response is something that is impacting every single one of us in the world.

The Stampede was to run from July 3 to July 12.

Officials were still hoping to pull off the event, despite laying off 80 per cent of its staff in mid-March. A team was working on the planning until the last minute.

“With the best interest of the community in mind, the organization's focus will now shift to fall, winter and spring events at Stampede Park, as well as planning for the 2021 Calgary Stampede,” he said.

“When it's appropriate, we'll gather together and celebrate again.”

The show that's been dubbed The Greatest Outdoor Show on Earth attracts more than 100,000 people a day over its 10-day run, which includes a parade, a fair, a midway and a nightly rodeo, along with chuckwagon races.

One of the richest rodeos in the world, it offers $2 million in prize money.

“I didn't think I'd ever see the day when that would happen,” Thurston said. “I feel terrible for everybody involved, the city, the revenue that will be lost in this.

“If it's the move they need to make, it's probably the right one. Everyone's health is probably a bigger deal in the large scale of things. But I'm really sad about it.”

The COVID-19 pandemic has led to the cancellation of many festivals and events across the country.

Alberta's chief medical officer of health, Dr. Deena Hinshaw, said Thursday that the risk of COVID-19 is too great to allow large summer events and festivals this year.

“We need to remember that a single case of COVID-19 can spread like wildfire in large groups of people,” she said.

This report by The Canadian Press was first published April 23, 2020