Achiuwa has ligament tears in ankle, will wear walking boot for 10 days 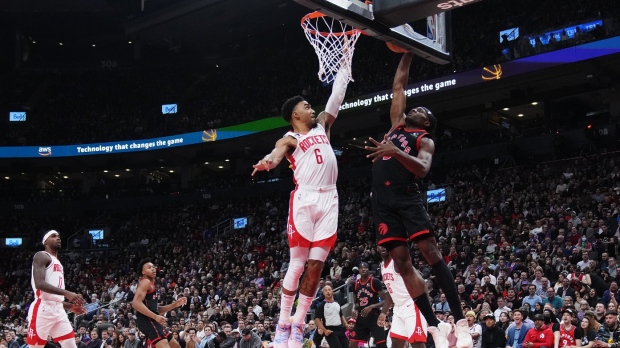 Toronto Raptors forward Precious Achiuwa (5) jumps up against Houston Rockets forward Kenyon Martin Jr. (6) during first half NBA basketball action in Toronto on Wednesday, Nov. 9, 2022. Achiuwa has been diagnosed with partial ligament tears in his right ankle, and is listed as out indefinitely. THE CANADIAN PRESS/Nathan Denette

Toronto Raptors forward Precious Achiuwa has been diagnosed with partial ligament tears in his right ankle, and is listed as out indefinitely.

Achiuwa injured the ankle and had to be helped off the court during the fourth quarter of Wednesday's 116-109 victory over the Houston Rockets.

The Raptors said Thursday that he will wear a walking boot for the next 10 days.

Achiuwa is averaging 8.8 points, 7.0 rebounds, 1.3 assists and 20.4 minutes in 12 games this season. He has scored in double figures seven times with two double-doubles.

Toronto is already shorthanded in the frontcourt with star forward Pascal Siakam sidelined with a groin injury.

The Raptors open a three-game road trip on Friday at Oklahoma City.