After stint as England's No. 2, Bev Priestman takes over Canada women's soccer team 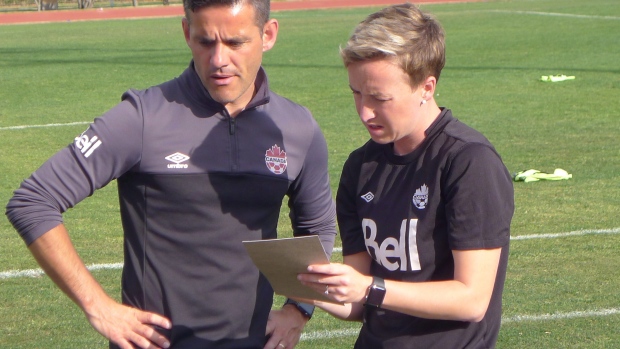 Coach John Herdman, centre, prepares for practice with Bev Priestman, a member of his coaching staff, ahead of Sunday's soccer game against the United States in the final of the CONCACAF Women's Olympic Qualifying Championship, in Houston, TX, on Saturday, Feb. 20, 2016. Priestman, Canada's new women's soccer coach, is looking for bravery on and off the field. (THE CANADIAN PRESS/Neil Davidson)

TORONTO - Bev Priestman, Canada's new women's soccer coach, is looking for bravery on and off the field.

Done right, she believes it will allow the eighth-ranked Canada women to move up the podium after winning back-to-back bronzes at the Olympics.

“We definitely need to change the colour of the medal,” said Priestman, a former assistant to Canada coach John Herdman, who switched from the Canadian women to men in January 2018. “I think two bronze is unbelievable and it's a fantastic achievement and credit to John, the staff, the players that have achieved that.

“To keep moving forward, we have to aim higher than that.”

Priestman, who was introduced Wednesday as the successor to Kenneth Heiner-Moller, starts Sunday with a contract that covers the next quadrennial.

At 34, the English native is three years younger than captain Christine Sinclair, the world's all-time international goal-scorer. But she has an extensive resume, with ties to Canada.

From 2013 to 2018, Priestman developed talent for the Canadian women's program and served as an assistant coach under Herdman, whom she had also worked with in New Zealand.

Two years ago, just nine months after her son Jack was born, she left a “great job” with Canada Soccer to “take bit of a risk” and return home to serve as Phil Neville's No. 2 with the English women's team.

She wanted to forge her own path.

“When I went to England, I always said from Day 1 that I wanted to be a No. 1,” she told The Canadian Press. “And so this is part of that jigsaw piece.

“For me, it's a top-10 nation, two bronze medals, the scrutiny and expectations you get with that. What I've learned about myself is probably you get the best out of me in those moments.”

Priestman isn't sure when she will be able to get her new team together. A Canadian camp scheduled for this month in England was scrapped on the advice of health experts.

But she has a message for the Canadian women, saying she has crystalized her own philosophy over the last two years.

“On the pitch, I would ask the players to be brave ... I want to dominate, with and without the ball.”

That might mean putting their bodies on the line, looking to pass upfield rather than a safer option behind or to the side. For her staff it might mean opting to skip a training session during the congested Olympic or World Cup schedule.

“Teams that do great things and great players are brave. So it'll definitely be something that I'd like to thread throughout the group. But I look at the success that has happened in the program, it's when they've been brave. It's not necessarily something that is the Bev Priestman way. I definitely think this group of players, when they've been their best, has been brave.”

Priestman is the product of a worldwide search, undergoing three interviews to succeed Heiner-Moller, who announced in June he was stepping down at summer's end to return to the Danish Football Association as head of coach education.

“We're a leader in the women's game internationally so this appointment is of the highest importance to Canada Soccer,” said Canada Soccer president Steven Reed.

Priestman faces a short runway, with the pandemic-delayed Tokyo Games set to start in July. The Canadian women have been inactive since March 10 when they wrapped up play at a tournament in France with a 2-2 tie with Brazil.

Priestman's history here and her experience in England made for an attractive combination for Canada Soccer.

There was a highly touted domestic candidate in Rhian Wilkinson, a former Canadian international who like Priestman has coached Canada's youth teams and served as an assistant coach on the senior side.

Senior players have spoken highly of the 38-year-old Wilkinson, who officially called an end to her playing career in early 2017. But the timing of the opening may have been a little early for Wilkinson.

Neville and Priestman guided England's Lionesses, currently ranked sixth in the world, to fourth place at last summer's World Cup in France. England was beaten in the third-place playoff by Sweden, which had eliminated Canada in the round of 16.

Neville is stepping down as England coach next year, with Sarina Wiegman set to take over after leading the Dutch women at the rescheduled Tokyo Olympics.

For Priestman, the Canada job is an opportunity to return to a place full of good memories on and off the field - she got married in Canada and her two-year-old son was born here - and to run her own show.

“In my opinion I've worked under two to three world-class coaches now,” she said. “I've had the best seat in the house really ... All those highs and then the lows. You take something from every coach and every moment and then you start to become clearer about what you believe in and what you think it takes to win.”

Most recently, Priestman served as coach of England's women's under-18 team slated to compete at the FIFA U-17 Women's World Cup in India, rescheduled for next year due to the global pandemic.

She said that move had “sharpened myself up again to whatever may come in the future.”

“For me the timing was actually perfect ... I definitely feel now is the right time,” she said of the Canadian job.

Looking at the current Canadian roster, Priestman sees a “brilliant blend of experience and youth.” She knows there is little room to manoeuvre short-term with COVID-19 restrictions, not to mention the limitations of an 18-woman Olympic roster.

A longer-term focus likely includes a changing of the guard.

“My job is to make that transition really easy with the young players and get that blend right at the right time.”

Priestman, who is not expected to make the move to Canada with her family until the first quarter of 2021, has been following the Canadian women, including the growing number playing in Europe.

Janine Beckie, Jessie Fleming, Shelina Zadorsky, Adriana Leon and Rylee Foster are currently playing in England in the Barclays FA Super Women's League while Kadeisha Buchanan, Ashley Lawrence, Jordyn Huitema and Quinn (who goes by one name) are among those playing in France and other European leagues.

“There's some benefits to being based in Europe short-term,” said Priestman.

Priestman grew up southwest of Newcastle in Consett, which is also Herdman's hometown. Priestman was 12 or 13 when first coached by Herdman. She started helping out at Herdman's Brazilian soccer school, kicking off a coaching relationship that eventually took both to New Zealand and then Canada.

In her first stint with Canada Soccer, Priestman served as national EXCEL director from under-15 to under-23 and coached Canadian teams at two FIFA U-17 Women's World Cups, three CONCACAF Women's Under-17 Championships as well as the CONCACAF Under-15 and Under-20 Championships.

Under Priestman's tutelage, Canadian players like Fleming, Huitema and Deanne Rose have made their mark on the international scene.

Priestman plans to make her home in Vancouver with wife Emma Humphries and their son Jack. Humphries, a former New Zealand international who is a UEFA A Licence coach, has been working as a coach with Liverpool's women's team.

Priestman worked for Everton, under respected coach Mo Marley, and England's Football Association before going to New Zealand, rising to head of New Zealand Football development before coming to Canada. She has a bachelor's degree in science and football, from Liverpool John Moores University.

She has completed her UEFA A Diploma (coaching award) and is currently a UEFA PRO Licence candidate.

Heiner-Moller, who took over the women's team when Herdman shifted to the men's program, left with a record of 20-10-5.