After taking 3-2 lead, Leafs eye elimination of Boston on Sunday 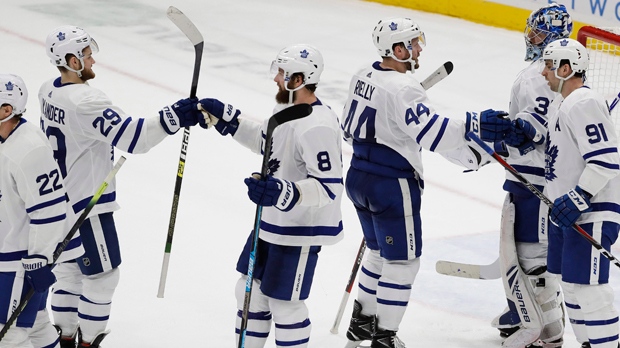 BOSTON -- Maple Leafs defenceman Jake Muzzin has extra motivation to beat Boston on Sunday and eliminate the Bruins in six games: It would mean some extra time to spend with his brand-new baby daughter.

Muzzin's wife, Courtney, gave birth to a daughter, Luna, on Thursday, the off day between Games 4 and 5. Muzzin was there for the delivery but got caught in some air travel delays while making his way to Boston in time to assist on Auston Matthews' opening goal in the 2-1 victory Friday night that gave Toronto a 3-2 lead in the series.

“It's been crazy,” Muzzin said. “I don't recommend having a baby in playoffs but, hey, that's the way it worked. And I'm grateful for the win tonight, and most importantly, the health and happiness of my wife and my new girl.”

A midseason acquisition from the Los Angeles Kings, Muzzin had five goals and 11 assists for the Leafs in the last 30 games of the regular season and has now assisted on goals in each of their victories in the first-round series.

Friday night's assist came midway through the third period of a scoreless game . Muzzin moved in from the left point and found Matthews at the right faceoff circle for a one-timer past Tuukka Rask.

“It was an amazing play,” Matthews said. “He made an unbelievable pass to me there, and I just tried to get the puck on net and I was able to get it through.”

The Bruins challenged for goaltender interference, saying that Zach Hyman had bumped into Rask; the ruling from the replay centre in Toronto was that there was not enough evidence to overturn it.

“Luckily, we were on the right side of things,” Hyman said. “I didn't watch it. I didn't want to watch it. But we're just happy they counted it.”

Game 6 is Sunday (3 p.m. EDT NBC in U.S.; Sportsnet, CBC and TVA Sports in Canada) in front of a Toronto crowd eager to see its team advance in the playoffs for the first time since 2004. The Bruins, who finished seven points ahead of the Maple Leafs in the Atlantic Division, will be trying to avoid their second first-round exit in three seasons.

“It's going to be fun,” Bruins forward Charlie Coyle said. “It's what it takes: one game. That's all. That's all that's on our mind right now is just one game. We have to take it and we'll prepare for it now.”

So far, the teams have alternated wins. Muzzin said his team can't count on Game 7 as a backup plan.

The confidence that the San Jose Sharks may have been lacking during three straight losses is back.

They feel so good after extending their first-round series against the Golden Knights with a 5-2 victory at home in Game 5 that centre Tomas Hertl predicted in a postgame television interview played in the arena that San Jose would win Game 6 on the road to send the series to the limit because “we're a better team than them.”

It wasn't quite a Mark Messier-style guarantee back in 1994 for the Rangers, but it generated enough interest that Hertl felt the need to clarify his statement.

“I didn't say guarantee,” Hertl said. “I just said I believed in this team, because I think we showed twice how we can play. But I believe we can come back for sure.”

The key will be getting off to another strong start. Hertl scored his first of two goals just 76 seconds into Game 5, ending a run of three straight games where Vegas struck first in the opening 90 seconds.

The Sharks also took an early lead in their Game 1 victory at home but haven't led at any point in the other three games.

“So far that's been the series,” captain Joe Pavelski said. “Who scores first seems to win. You get that confidence boost. We believe we can come back if we have to, but we don't want to. We want to have those better starts and go from there and tonight we had that.”