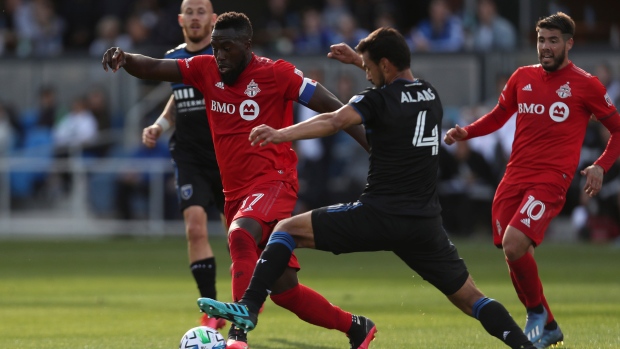 SAN JOSE, Calif. - Oswaldo Alanis scored on the last kick of the game as the San Jose Earthquakes salvaged a 2-2 draw against Toronto FC on Saturday in the MLS season opener for both teams.

Alanis, in his first MLS game, scored on a free kick in the 95th minute to complete San Jose's comeback from two goals down and deny Toronto coach Greg Vanney his 100th victory in all competitions with TFC.

The Mexican defender signed with the Earthquakes this January on a one-year loan from Mexico's Chivas de Guadalajara. Alanis was playing for Chivas Guadalajara when the Mexican team beat TFC on penalties in the 2018 CONCACAF Champions League final. He converted his penalty in the 4-2 penalty shootout win.

“I think it's a good first step,” Alanis said of scoring in his league debut. “It's one more step in my career, one more step for what's to come. I am working on my confidence and starting off like this definitely helps with that.

“I have always taken one step at a time, and this is only the start of the season.”

Spanish playmaker Alejandro Pozuelo scored on a penalty kick in the 40th minute for TFC and Canada's Richie Laryea tacked on a goal early in the second half for a 2-0 lead.

Toronto was awarded the first-half penalty kick when TFC striker Jozy Altidore was taken down in the area, and Pozuelo responded with the game's first goal. Pozuelo scored seven times on eight penalty kicks last season.

Laryea, a 25-year-old midfielder from Toronto, extended TFC's lead to 2-0 in the 51st minute. But the Earthquakes sliced the deficit moments later when Andres Rios found the back of the net.

“From it, we build. It's a strong mentality. We've been out in California for four weeks now. To play the first game having been out here and not seeing home in a long time, the guys really dug deep. A lot of things to build on.”

San Jose's Danny Hoesen had a chance to tie the game before halftime, but his shot sailed just wide of the net after it was deflected by Toronto defender Justin Morrow. Earthquakes forward Andy Rios had another chance with a header off a corner kick, but it was headed out by Chris Mavigna.

The Earthquakes hold a 6-5-6 all-time record against Toronto, including a 3-2-3 record at home.

Earthquakes veteran forward Chris Wondolowski, the all-time MLS leading goal scorer, came on as a sub in the second half to a loud applause from the San Jose fans. The 37-year-old Wondolowski has 170 career goals in 398 MLS appearances.

“Wondo's a great guy, works really hard,” Altidore said. “To see what he's done along the years, it's no surprise that he's had the success he's had, so I wish him nothing but the best. He's been an example from his first game until now.

“He's had quite a career, so I wish him all the best and I hope he finishes strong.”

Altidore, wearing the captain's armband in place of the injured Michael Bradley, played 78 minutes before being replaced by Patrick Mullins. Altidore received a yellow card for unsporting behaviour in the 71st minute.

Bradley underwent ankle surgery on Jan. 22 with a recovery time estimated at four months, which takes him to mid-May - some 13 or 14 games into TFC's 34-match regular-season schedule.

Toronto is coming off its third appearance in the MLS Cup final in four years last season. TFC lost the championship game to Seattle 3-1 in November.

After opening last season at 4-1-1, Toronto endured a 2-7-4 slump before going on a run from mid-July on. TFC only lost twice in the 18 regular-season and playoff contests (10-2-6) leading up to the championship game.

This report by The Canadian Press was first published Feb. 29, 2020.