"All or Nothing" series offers unprecedented peek behind Maple Leafs' curtain 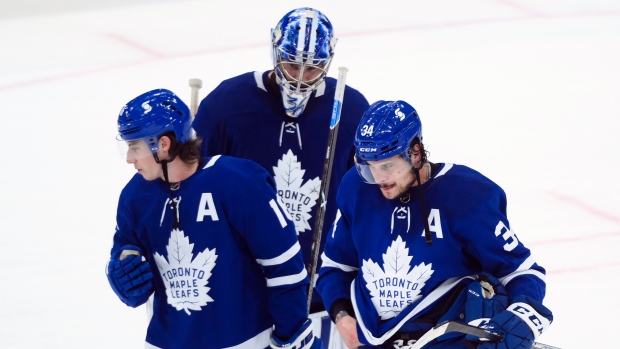 Toronto Maple Leafs forward Auston Matthews (34) and teammates Mitchell Marner (16) and Jack Campbell (36) skate off in dejection at the end of third period NHL Stanley Cup hockey action against the Montreal Canadiens, in Toronto, Monday, May 31, 2021. The Canadiens saw the Leafs out of contention for the Cup 3-1 after a seven game series. THE CANADIAN PRESS/Nathan Denette

TORONTO - The emotions of the moment are raw.

Toronto has just lost to the Montreal Canadiens in Game 7, the final act of a stunning collapse after building a 3-1 series lead to cement another devastating first-round playoff defeat.

The scenes, which play out in the finale of Prime Video's “All or Nothing: Toronto Maple Leafs,” are among the candid glimpses behind the curtain from the five-episode series that tracks the Original Six franchise through last season.

“It's real ... that's what you want,” head coach Sheldon Keefe said in an interview with The Canadian Press when asked what a tortured fan base will take from the final gut-wrenching sequence. “How people interpret it, that's up to them. I just know that our people care deeply. We recognize the responsibility that we have.

“When you fail to deliver and you don't succeed, it hits you harder.”

It's no secret how the 2020-21 season, one played in the long shadow of the COVID-19 pandemic that started with so much hope and promise, ends for the Leafs - an organization that's gone 54 years without a Stanley Cup and hasn't won a playoff round since 2004.

But “All or Nothing,” which premieres on Amazon's streaming service Friday, brings viewers inside the NHL ropes with unprecedented, behind-the-scenes access.

There are candid conversations between players and management, tense exchanges amongst coaches, impassioned speeches and colourful language.

Cameras are there when defenceman Jake Muzzin breaks a bone in his face and when winger Zach Hyman suffers a knee injury.

“You forgot that they were there,” Keefe said of the film crew. “You're in a conversation, you're coaching, you're teaching or you're talking to your team.”

The acquisition of centre Nick Foligno ahead of the NHL trade deadline features prominently as general manager Kyle Dubas navigates the market, while goaltender Frederik Andersen's attempt to get back to full health receives lots of screen time.

There are also plenty of lighter moments, including Joe Thornton listening to his car radio as hockey pundit Brian Burke, who's now president of the Pittsburgh Penguins, criticizes the Leafs' move to sign the veteran winger.

Matthews said he's both looking forward to starting the series - voiced by Toronto-born actor and life-long Leafs fan Will Arnett - while at the same time dreading its conclusion.

“Might skip the last episode,” he said. “It will be a different perspective of what life is like.”

Marner, a lightning rod for frustrated fans in the aftermath of last spring's post-season, hopes people see the Leafs as more than just names on a jersey.

“Everyone always just thinks of us as hockey players - we should just be hockey players and nothing else,” he said. “Everyone on our team has so much more to show than just getting dressed up in our gear and going out and playing 60 minutes of hockey every night.”

“All or Nothing” also deals with the horrifying injury suffered by Toronto captain John Tavares in Game 1 against Montreal, including gripping visuals and audio of the anxious minutes before he was stretchered off the ice.

Then there's Keefe - really the star of a series that should appeal to more than just hockey fans - as he relentlessly pushes his team.

The coach said one concern before filming was that certain moments of tension might get overblown months after the fact.

“They want to put together something that is going to be entertaining,” said Keefe, who has yet to see the show's final cut. “There's a lot of stuff that goes on that's pretty boring (during the season). It's thousands of hours of footage.

“Some conversations are captured, some are not. Some are in spaces where there's no cameras or microphones, some are done through text or through cell phone or while you're walking down the hallway. A lot of that context is not picked up.”

He also doesn't expect there to be any hard feelings.

“Like everything else that we go through around here, we've got to just block that out and focus on the relationships that we have inside the walls,” Keefe said. “And I'm confident in those.”

He added one element that might get overblown is a common theme woven throughout regarding his perceived worry that Toronto, which made a number of strides last season despite its crushing conclusion, isn't ready to meet the challenges ahead.

“Every coach's job is to always be looking at where you can improve,” he said. “When the stakes are so high, you're trying to be elite amongst the elite. It's challenging to get there, so you're going to have those types of conversations and those moments. We had a lot of positivity around our team last season, a lot of reasons to believe.

“That's part of why the disappointment felt like it did.”

But that disappointment, vividly documented in “All of Nothing,” is something Keefe hopes shines through.

“We share in (fans') passion and their emotion,” he said. “Our job is to wake up each day and work to be better than we were the day before.

“We're doing everything that we can to deliver.”