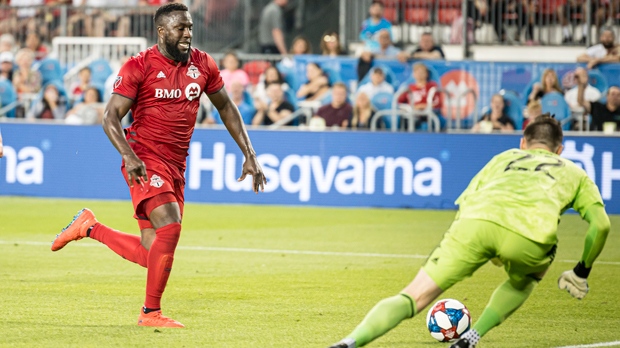 With Toronto up 1-0 at the half, Altidore capped off a counter-attack in the 50th minute when he curled a terrific right-footed shot from outside the penalty box past a diving Przemyslaw Tyton.

It was Altidore's ninth goal in 13 games this season. And it seemed to spark Cincinnati, which quickly answered the bell before an announced crowd of 25,765 at BMO Field.

Emmanuel Ledesma cut the lead to 2-1 in the 58th minute with a low, hard shot that beat Quentin Westberg. But Toronto held out for the win.

Nick DeLeon opened the scoring for Toronto in the 16th minute, using his head to flick home Omar Gonzelez's header off an Alejandro Pozuelo corner past the six-foot-five Tyton. It was the fifth of the season for DeLeon, who assisted on Altidore's goal.

For the visitors, it was another painful night at the office. Cincinnati has lost three straight, nine of its last 11 (2-9-0) and has taken just 10 of the 57 points available in its last 19 games (3-15-1). Mired at the bottom of the standings, the visitors have the worst defence in MLS having leaked 53 goals.

Toronto (9-9-5) was coming off a 3-1 loss to visiting Houston and had won just three of its last 14 outings (3-7-4). Making eight changes from the diluted starting 11 against the Dynamo, coach Greg Vanney fielded a far stronger group with both Pozuelo and veteran defender Drew Moor returning from injury.

Only Westberg, DeLeon and fullback Justin Morrow retained their place.

Tyton, a Polish international, started for Spencer Richey, one of a half-dozen injured Cincinnati players.

The home side dominated play early, stringing together passes in lengthy attacks. Cincinnati wasn't credited with a shot until the 37th minute but only trailed 1-0 at a half that saw 60 per cent possession for Toronto.

DeLeon had a chance at making it 2-0 in the 27th but the ball got caught up in his feet from a Michael Bradley free kick. Toronto winger Jacob Shaffelburg shot high soon after.

Cincinnati's first shot was a long-range effort from Ledesma that flew high over the crossbar. Shaffelburg came close in the 44th, his powerful shot deflected wide by a defender.

Westberg was finally called into the action in the 47th minute, tipping a long-range shot from Caleb Stanko over the crossbar.

There was some bad blood in the 61st minute when Kendall Waston's scathing tackle felled Bradley. Waston was yellow-carded on the play.

The first-ever meeting of the clubs marked a return to BMO Field for Cincinnati defender Nick Hagglund, who was drafted by Toronto and spent five seasons here before being traded to his home town team in January.

There were hugs all around prior to warmup as Hagglund caught up with former teammates and Toronto officials. The 26-year-old defender did not get the start, however, with interim coach Yoann Damet giving Dutch defender Maikel van der Werff his first start, alongside Waston.

Saturday's game was also the first of eight straight against Eastern opposition for Toronto, which started the day one point out of the seventh and last playoff spot in the Eastern Conference.

Newly signed Venezuelan winger Erickson Gallardo will have to wait for his TFC debut. Listed as questionable with a quad strain, he did not dress.

Both teams are back in action next Saturday. Toronto is at the New York Red Bulls while Cincinnati hosts the Vancouver Whitecaps.