Andersen practices but Hutchinson will start for Maple Leafs against Canucks 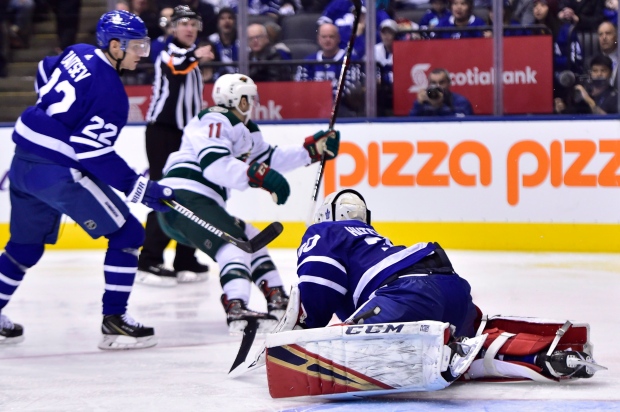 TORONTO -- Given a moment to finally catch his breath, Michael Hutchinson sat down for dinner with his family Thursday.

The 28-year-old had been a member of the Florida Panthers' American Hockey League affiliate in Springfield, Mass., six days earlier when the Toronto Maple Leafs acquired him for a draft pick to provide the organization some goaltending depth in the minors.

Before his head could stop spinning at the prospect of perhaps getting the chance to play for the NHL team he grew up watching, Hutchinson was starting for the injury-hit Leafs, making 30 saves in Thursday's 4-3 loss to the Minnesota Wild.

"(We) talked about the whole hockey journey and how it ended up there," the native of nearby Barrie, Ont., said of the post-game meal with his wife and parents. "It was cool to take a step back and really appreciate the moment.

"But now it makes you hungry for more. I'm looking forward to getting my first win and helping this team out as best I can."

Hutchinson, who lists Felix Potvin as his favourite all-time Leafs netminder, will get another shot when Toronto hosts the Vancouver Canucks on Saturday.

Leafs No. 1 goalie Frederik Andersen (groin) returned to practice Friday for the first time since Dec. 27, but isn't healthy enough to play, while backup Garret Sparks, who suffered a concussion during Wednesday's on-ice session, is also out.

"It's getting close," Andersen said of his status. "We've seen some good progression over the last few days."

Andersen, who hasn't played since Dec. 22, said his injury didn't happen on one specific play, but has been lingering for about a month.

"The Christmas break didn't respond the way we hoped," said the 29-year-old. "We figured it was time to shut it down and make sure we didn't beat around the bush anymore."

Sparks played three straight games in Andersen's initial absence -- the Dane did dress as the backup Dec. 23 and Dec. 28 -- but his concussion forced the Leafs to recall both Hutchinson and fellow Toronto Marlies netminder Kasimir Kaskisuo from the AHL on an emergency basis for Thursday's game.

Hutchinson, who now has a Leafs cover on his white mask and new pads to replace his Florida gear on the way, said his phone blew up after his first start for Toronto.

"I've changed numbers over the years quite a bit, so it was neat for some people that you've played with throughout your junior career track you down and congratulate you," he said. "It was definitely cool to connect with people I hadn't talked to in a little while."

Kaskisuo was returned to the Marlies on Friday, but it remains unclear if he, Andersen, or another option goalie currently outside the organization will serve as Hutchinson's backup Saturday.

"Well, there's no tree," head coach Mike Babcock said when asked if the Leafs are looking for more crease help. "You'd like to have a tree in your backyard and just be able to pick 'em off.

Andersen has been picking off opponents when healthy in 2018-19, compiling a 20-9-1 record with .923 save percentage and a 2.50 goals-against average in 30 starts. His win total is second only to Marc-Andre Fleury's 23 with the Vegas Golden Knights, while he's faced 781 shots at even strength, second only to Ottawa's Craig Anderson (820).

But even with the Leafs on a two-game slide and down to their third goalie -- fifth if you consider the team lost Curtis McElhinney and Calvin Pickard on waivers before the season -- Andersen is happy to take his time recuperating with Toronto still sitting comfortably at 26-12-2.

"You have to make sure you do your rehab the right way," he said. "Push a little too hard and you might make it worse.

"You can't let that stuff get in your emotions and affect you."

Hutchinson, meanwhile, is once again looking to simply prove he belongs in the NHL.

He signed with the Panthers on July 1, but wasn't able to grab the reins when Roberto Luongo got hurt early on, finishing 1-1-2 with an .839 save percentage and a 4.18 GAA before getting sent to the AHL's Springfield Thunderbirds.

"There's a bunch of things in hockey that happen that are out of your control. You have to really focus on the stuff that you can control. That's the only thing I'm worried about right now."

And right now, that's playing for the Leafs against Canucks under the lights on Saturday.

"It's an amazing feeling," Hutchinson said. "It's a childhood dream come true."