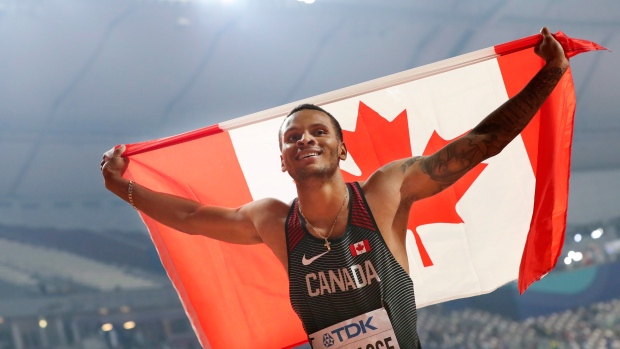 PICKERING, Ont. -- Andre De Grasse had just wrapped up a morning of shooting a Team Visa commercial at the Pickering Soccer Centre.

A talent wrangler was pressing De Grasse about a wardrobe change. And he needed to get to a second venue, she stressed, for another shoot.

But the 25-year-old sprint star from Markham, Ont., had other ideas. And so De Grasse made a beeline across the field, the wrangler trailing behind, for the 120-metre strip of rubberized track where his former coach Tony Sharpe was putting his group of young Speed Academy sprinters through a workout.

"I just want to say hi to them before I go," De Grasse said to the wrangler. He also had two pairs of new spikes for a couple of Sharpe's athletes in need.

De Grasse, who was discovered by Sharpe at a high school meet, skyrocketed to stardom before hamstring injuries in back-to-back years derailed the better part of two seasons.

Now back at full health, De Grasse, who's captured silver and bronze at the Olympics and world championships, should be one of Canada's biggest stars at this summer's Tokyo Olympics.

The sprinter speaks sincerely about his golden Olympic goal.

"I'm missing that gold medal," De Grasse said Saturday. "And it's pretty good, my partner Nia (Ali, an American hurdler), she got a gold medal at the world championships, so I just use that as motivation. I see her gold medal, and I'm like, 'Oh, I'm missing one from the family.'

"Definitely looking forward to trying to just accomplish that, whether it's either in the 100 or 200. And even you know, we have a great shot as well in the relay."

De Grasse doesn't know yet when he'll open the season. The coronavirus which forced the postponement of the world indoor championships (which wasn't on De Grasse's competitive schedule) now threatens two Diamond League meets scheduled for China in May. He'll likely race in some U.S. meets in April then head to Europe.

De Grasse announced he was back by racing to silver in the 200 and bronze in the 100 at the world championships in Doha this past fall.

Many had written off the Canadian sprinter. A few proclaimed surprise at his most recent pair of world medals. Sharpe scoffed at the doubters.

"When you have the talent of an Andre De Grasse, if you stay healthy, you're going to run fast," Sharpe said. "In junior college (in Coffeyville, Kansas), training probably almost part-time, coaching not at the highest level, but good enough to run 9.9 (seconds wind-aided). When that happens in your first or second year in the sport, that's pure natural ability."

Sharpe believes, if not for the two hamstring setbacks, he'd be "a 9.7 sprinter."

"Because you sort of have to start from ground zero, and build, and rebuild and rebuild, so if you get three or four years consecutively where you can progress, the sky's the limit."

De Grasse's solid world championship showing came after a year of upheaval. He switched coaches, moving with Ali to Jacksonville, Fla., to train with Rana Reider. He was adjusting to being a new dad. Their daughter Yuri -- her middle name is Zen, so phonetically her names sound like "your reason" -- will turn two this summer. Ali has a son from a previous relationship, giving birth to Titus a year before winning silver at the 2016 Rio Olympics.

But De Grasse erased any lingering injury doubts by running sub-10 seconds in the 100 metres in July, while not in top form. He ran another sub-10 a couple of weeks before the world championships. And so, he arrived in Doha fully expecting a good outcome.

"And then I knew once I got into the final I had a great shot of just executing and being able to come away with a medal," he said.

De Grasse thrives when the lights are brightest. The bigger the stage the better.

"Performance on demand," Sharpe said. "So, I never bet against him. I'm saying it on record that I expect Andre can take home gold (in Tokyo), probably more so in the 200 than the 100. I know we hear about Noah Lyles (world No. 1-ranked last season) and all these guys. But every race is a different race, so I'm not putting limitations on it. He's proven he's got the tools, and I don't know why he wouldn't be able to win.

"Two years off the track not competing, it plays a role in where you are right now, so if you can build on last year, there's no reason this guy can't go 9.7."

Sharpe spent a week in Florida with De Grasse and Ali in the fall.

"It was fun, watching him with the diapers and everything," Shape said. "He's adjusting well."

The couple trains six days a week. A typical day sees them drop Yuri at daycare and Titus at school, and then spend most of the day training before picking up the kids.

De Grasse posted a funny parenting mishap on Instagram recently. Racing late with Yuri to her swimming lessons, he put her bathing suit on backwards.

"It's a challenge, every day you learn something new, but it's been a fun ride, so definitely just looking forward to seeing her keep growing," De Grasse said.

It was De Grasse's first time meeting Sinclair, who posed for pictures afterward with a team of young girls who were playing on an adjacent fields.

"She's a great player, definitely she's pretty to watch, like exciting," De Grasse. "That was pretty cool that I got to hook up with her today and be in a campaign with her."

This report by The Canadian Press was first published Feb. 17, 2020.