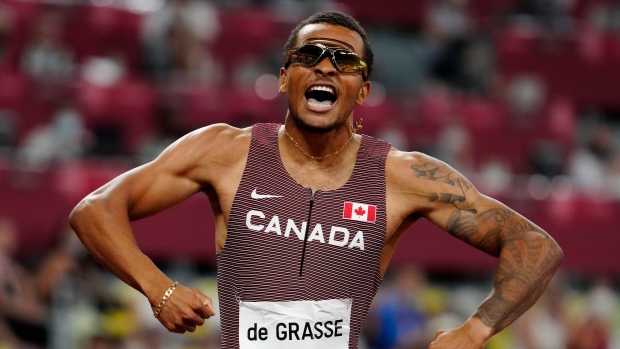 Canada's Andre De Grasse races to a gold medal in the Men's 200m final during the Tokyo Olympics in Tokyo, Japan on Wednesday, August 4, 2021. THE CANADIAN PRESS/Frank Gunn

TOKYO - Canada's Andre De Grasse has raced to a gold medal in the men's 200 metres at the Tokyo Olympics.

De Grasse roared to the finish line in a Canadian-record time of 19.62 seconds.

Winning his fifth Olympic medal - and second in Tokyo after taking bronze in the 100 metres - De Grasse tied Phil Edwards for the most by a Canadian track and field athlete. Edwards captured five bronze medals between 1928 and 1936.

De Grasse's victory comes 25 years - plus a week - after Donovan Bailey raced to 100-metre gold at the 1996 Atlanta Olympics.