Andreescu, Shapovalov, Auger-Aliassime move on to Italian Open second round 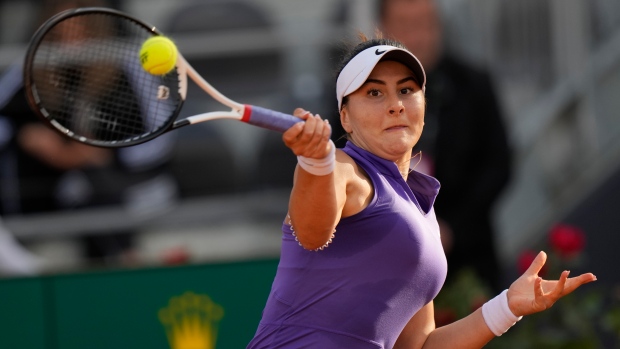 Bianca Andreescu returns the ball to Emma Raducanu during their match at the Italian Open tennis tournament, in Rome, Tuesday, May 10, 2022. (AP Photo/Andrew Medichini)

ROME - Canada's Bianca Andreescu advanced to the second round of the Italian Open on a walkover Tuesday after opponent Emma Raducanu retired due to a back injury.

Andreescu led the battle of recent U.S. Open champions 6-2, 2-1 when Raducanu, the 10th seed in Rome, was forced to withdraw.

Raducanu's struggles were evident early. Andreescu went up a break quickly and proceeded to convert three of her 11 breakpoint chances while winning 84 per cent of service points. Andreescu did not face a break point.

Shapovalov had a relatively routine win following his testy three-plus hour opener against Italian favourite Lorenzo Sonego that saw him swear at the booing crowd after arguing with a line judge.

Shapovalov overcame five unforced errors and saved the only break point he faced in the win that took one hour 40 minutes to complete.

He broke Basilashvili once in the first set, then took a 5-1 lead in the second set tiebreaker after both players held serve

Basilashvili came back and narrowed the gap to 6-5 on a Shapovalov double-fault, but the Canadian cashed in against serve on his first match-point chance.

Shapovalov will next face the winner of a Wednesday match between Spanish legend Rafael Nadal and hard-serving American John Isner.

Auger-Aliassime, who had a bye in the first round, needed just over three hours to defeat world No. 29 Davidovich Fokina.

The Canadian responded after Davidovich Fokina rode his effective first serve to victory in the opening set.

Auger-Aliassime defended all three break points he faced in the set, including two in the ninth game with the score tied 4-4.

With both players holding serve throughout the set, Auger-Aliassime scored five straight points in the tiebreaker to tie the match at a set each.

Auger-Aliassime will next face the winner of Wednesday's match between 12th-seed Argentine Diego Schwartzman and Marcos Giron of the United States.

This report by The Canadian Press was first published May 10, 2022.