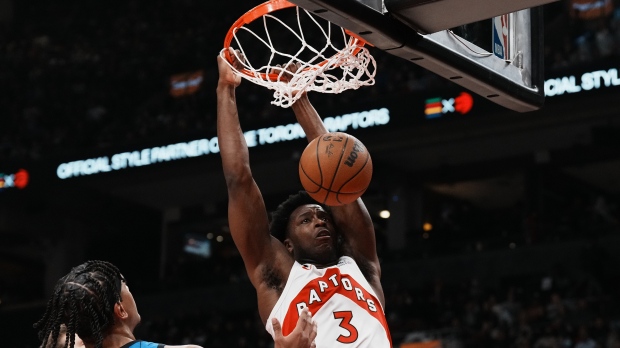 TORONTO - O.G. Anunoby tied his season high with 32 points and the Toronto Raptors bounced back from a pair of ugly losses with a 121-108 rout of the Orlando Magic on Saturday.

Scottie Barnes had 17 points and a season-high 14 rebounds, while Fred VanVleet had 13 points and seven assists.

The Raptors were back from a disastrous two-game road trip that VanVleet had summed up simply with: “we suck right now.” They dug themselves an early 36-point hole in their 114-105 loss Friday in Brooklyn. It was a similar story two nights earlier in a 126-108 blowout loss at New Orleans.

Coach Nick Nurse said there was no sense of panic on Saturday. Players were gathering, he said, to talk about “getting off to a better start and being ready for the jump and those kinds of things.

“They're very attentive and focused. They understand that's not what is acceptable around here. They're trying to work and get through it.”

Seems to have worked. The Raptors scored on eight of their first 10 shots to take an early 11-point lead, and shot a sizzling 71.4 per cent in the first quarter. Barnes' turnaround shot with 1.8 seconds left in the frame sent them into the second with a 36-22 lead.

The Raptors stretched their lead to 17 points early in the second and headed into halftime up 64-48.

Midway through the third, Anunoby, who leads the league in steals, snatched the ball off Moritz Wagner and finished with a running dunk that capped a 25-8 run and gave Toronto a 33-point lead. The Raptors led 94-73 with one quarter left.

Ross, who was a perfect 7-for-7 from the field, including four three-pointers, scored from long range with 5:42 to play to pull the Magic to within 17 points. But that's as close as the visitors would come, and Nurse subbed out his starters moments later.

The Magic have been hit by injuries, and were missing top rebounder Wendell Carter Jr., point guard Jalen Suggs and Mo Bamba on Saturday.

The Raptors have won or tied the season series against Orlando for the past 10 seasons, and have now won nine of their last 11 home games against Orlando dating back to March of 2017 â€¦ Magic rookie and Canadian Caleb Houstan was recognized with a brief video tribute. The forward from Mississauga, Ont., who was drafted 32nd overall, had eight points in 24 minutes.

Saturday began a stretch of nine of 14 games at home for the Raptors, where they are 9-2 this season.

The Raptors host the conference-leading Boston Celtics on Monday and LeBron James and the Los Angeles Lakers on Wednesday.

This report by The Canadian Press was first published Dec. 3, 2022.