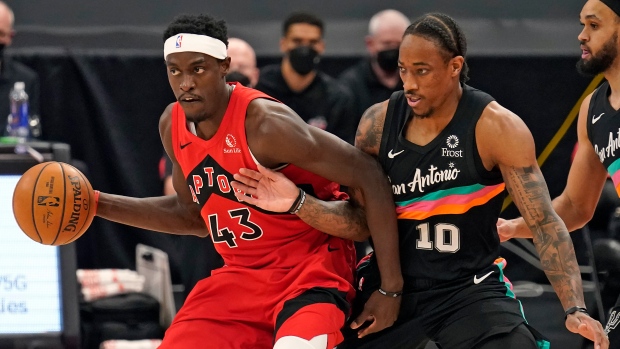 Raptors rookie Malachi Flynn had a big fourth quarter, scoring eight of his 16 points in the period and finishing with seven assists.

Khem Birch had 14 points and six rebounds in his first start for Toronto, which went with a big lineup in the absence of most of its guards. The Raptors enjoyed a rare 54-42 rebound advantage.

Anunoby scored nine points in the early minutes of the second half, helping Toronto move ahead by nine - the largest lead for either team until late in the fourth quarter.

The Spurs answered with a 13-3 run that was capped by a pair of 3-pointers by White to regain the lead.

But Toronto pulled ahead late in the game when Flynn set up Birch for a dunk with a lead pass, then hit a 3-pointer and a turnaround jumper for a 110-97 lead with 3:24 left.

Paul Watson, playing for the first time since March 24 after missing 10 games due to the NBA's health and safety protocol, hit two 3-pointers early in the fourth quarter for Toronto.

Spurs: Mills led all scorers with 17 points in the first half despite playing only 14 minutes. ... Having completed a five-game road trip, the Spurs will play 10 of their next 14 on the road.

Raptors: G Fred VanVleet served a one-game suspension for his part in an on-court altercation in a game against the Los Angeles Lakers on April 6, indicating that VanVleet is off the injured list. He missed six games with a left hip flexor. ... G Kyle Lowry (rest), G Gary Trent (ankle) and F DeAndre Bembry (hamstring) did not play.

Spurs: at home against Portland on Friday night.

Raptors: Play against Orlando in Tampa on Friday night.