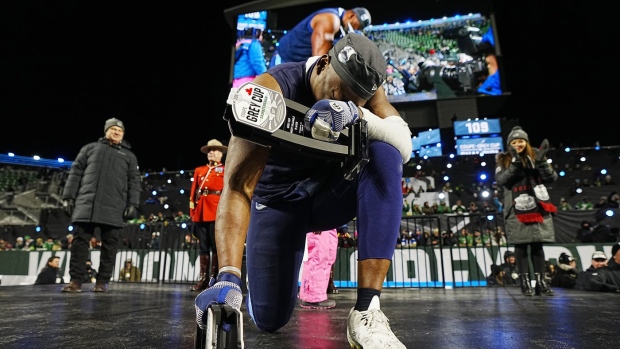 Toronto Argonauts linebacker Henoc Muamba celebrates after being named the Grey Cup's Most Valuable Player and Most Valuable Canadian after defeating the Winnipeg Blue Bombers in the 109th Grey Cup at Mosaic Stadium in Regina, Sunday, Nov. 20, 2022. THE CANADIAN PRESS/Jonathan Hayward

Toronto Argonauts linebacker Henoc Muamba was named both the most valuable player and most valuable Canadian of the Grey Cup on Sunday.

The 11-year veteran recorded three tackles and an interception in the Argos' 24-23 victory over the Winnipeg Blue Bombers.

It was Toronto's first Grey Cup victory since 2017. Meanwhile, the Bombers fell short of a three-peat after winning consecutive titles.

The interception came with just 3:20 remaining in the contest against Bombers quarterback Zach Collaros.