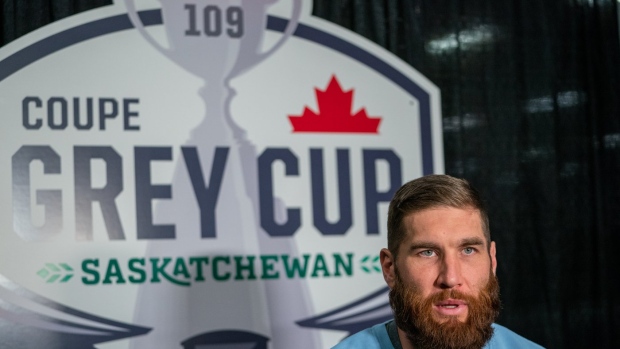 Toronto Argonauts quarterback McLeod Bethel-Thompson speaks to the media during a media day ahead of the 109th Grey Cup at Queensbury Convention Centre in Regina, on Thursday, November 17, 2022. THE CANADIAN PRESS/Heywood Yu

McLeod Bethel-Thompson has had a meandering journey through professional football, but he’s not about to get caught up what a Grey Cup championship would mean to his career.

The 34-year-old Toronto Argonauts quarterback joined the professional ranks in 2011, playing in the Arena Football League with the San Jose Saber Cats and the United Football League with the Sacramento Mountain Lions before bouncing around the NFL on the practice rosters of the San Francisco 49ers (three times), Miami Dolphins (twice), Minnesota Vikings (twice), New England Patriots and Philadelphia Eagles.

He joined the CFL in 2017, serving as the Argos' third-string quarterback behind starter Ricky Ray and backup Cody Fajardo. Although he was a member of Toronto’s Grey Cup-winning team that season, Sunday’s game will give Bethel-Thompson the opportunity to win as a starting quarterback.

“You can't help but have the vision of hoisting the Grey Cup and thinking about the joy that it would give me to see my teammates happy," he said at Thursday’s Grey Cup media day. "That's why I play the game, it’s for my brothers so you have those moments.

"Then you realize that the game is three or four days away, so let’s not worry about that or dwell on that too long. Now my job is to stay in the moment and focus what I can do to get us there.”

While some of the focus this week has been on Bethel-Thompson’s career year this season — he led the CFL with 4,731 passing yards — an incident in the East Division semifinal on Nov. 13 has attracted a lot of attention.

Midway through the first quarter of Toronto’s 37-24 victory over the Montreal Alouettes, Bethel-Thompson was upset that Argos head coach Ryan Dinwiddie wasn’t challenging a diving reception by Brandon Banks that was ruled incomplete.

Known as a fiery competitor, Bethel-Thompson had to be separated from Dinwiddie by a member of the Argos coaching staff. At the head coaches’ press conference on Wednesday, Dinwiddie said he understands that there will be disagreements on the sideline but “at the same time, you’ve got to still keep an even keel . . . At the end of the day, we’ve got to come together and find a way to win this game.”

Bethel-Thompson apologized to Dinwiddie and took responsibility for the incident. Emotion has an important role in how he plays, and Bethel-Thompson isn’t about to change that part of his game.

The Argos head into Sunday’s game as underdogs to the two-time defending Grey Cup champion Bombers. The teams met once in the regular season, with the Bombers edging the Argos 23-22 on July 4.

Bethel-Thompson believes that game demonstrated that the Argos are capable of beating the Bombers.

“We know we can play with them. We got in a hole early, we had two picks early that kind of put us behind the 8-ball but then we found our way back and really dominated in the second half,” said Bethel-Thompson.

“It's just about who is going to be the best on Sunday, who is going to come out on top and who is going to execute. We know they're a great defence so we have to start early, execute on first down, move the chains on second down and stay on the field. That will give us confidence.”