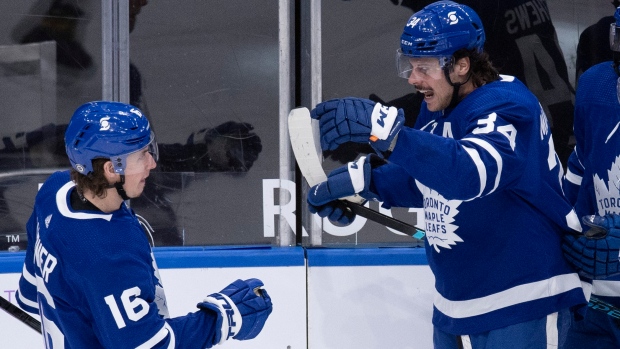 TORONTO - Auston Matthews scored three times to increase his league-leading goal total to 31, Jack Campbell made 27 saves to set an NHL record for consecutive victories to start a season, and the Toronto Maple Leafs defeated the Ottawa Senators 6-5 on Saturday night.

Mitch Marner added a goal and three assists for Toronto (28-10-3), which has won six straight and improved to 5-2-1 against its provincial rival in the pandemic-shortened campaign. Matthews, who registered the third hat trick of his career, also had an assist for a four-point night of his own.

Ilya Mikheyev and Zach Hyman, with a goal and an assist each, provided the rest of the offence for the North Division leaders, who are 9-0-1 over their last 10 outings, and haven't lost in regulation since March 19. Playing on the top line with Matthews and Marner, Alex Galchenyuk chipped in with two assists.

Matthews now has five straight 30-goal seasons to start his career, while Campbell owns the high-water mark for wins to begin a year with 11 - one more than the 10 registered by Montreal Canadiens goalie Carey Price in 2016-17.

The Toronto netminder also set a franchise record Wednesday by picking up a ninth straight win.

Tim Stutzle, Drake Batherson and Connor Brown, with a goal and an assist each, Alex Formenton and Josh Norris replied for Ottawa (13-25-4). Anton Forsberg stopped 32 shots for the Senators, who have lost four straight and are 1-5-1 over their last seven.

Brown set a franchise record by scoring in a seventh straight game - breaking a tie with Batherson, Jason Spezza, Dany Heatley, Daniel Alfredsson and Bob Kudelski - against the team that drafted him in 2012 and traded him away in 2019.

After an even start that saw Campbell forced into a couple tricky saves, Matthews scored his 29th goal of the season at 8:52 of the first period on a sequence that started with Senators defenceman Erik Gudbranson turning the puck over in the neutral zone. Marner raced the other way and dropped a pass to Matthews, who ripped a shot past Forsberg's blocker.

Leafs head coach Sheldon Keefe's decision to go right back to his No. 1 trio of Matthews, Marner and Galchenyuk then paid immediate dividends.

Galchenyuk, who played sparingly with Ottawa earlier this season before being traded to the Carolina Hurricanes and subsequently flipped to Toronto, started the play that ended with two more quick passes and Matthews' 30th just 39 seconds later.

Forsberg robbed Morgan Rielly, who had the primary assist on Toronto's second goal, at the side of the net with his pad to keep Ottawa only down by two through 20 minutes.

The Senators got on the scoreboard at 12:02 of the second when Batherson cleaned up Stutzle's shot off the post for his 13th.

The Leafs got their first power play, but Batherson stole the puck from Rielly and raced in on a breakaway to score his third.

Ottawa then added its third goal in 4:23 to take the lead when Stutzle, who hadn't scored in 13 games and had just one over his last 22, wired a shot upstairs on Campbell off a faceoff to make it 3-2.

The goal deluge continued 27 seconds after that when Marner popped his 14th home off a mad scramble in Forsberg's crease after Stutzle a turnover.

The Leafs kept coming and restored their advantage with under a minute to go in the period when Senators defenceman Thomas Chabot also coughed the puck up to Marner, who fed Matthews for his 31st.

Matthews had a memorable four-goal NHL debut against Ottawa after Toronto picked him first overall in the 2016 draft. The 23-year-old has scored 22 times - including nine this season alone - and added 16 assists in 23 career games against the Senators.

The Leafs made it 5-3 at 4:44 of the third when Mikheyev made it 5-3 with his sixth, but Brown scored his 13th to seven set the Ottawa franchise mark just over three minutes later.

Formenton came close to equalizing for the Senators a second time from the slot only to see Campbell, who remains Toronto's No. 1 crease option with Frederik Andersen dealing with a lower-body injury, fire out his blocker.

Hyman scored his 14th into an empty net before Norris replied with a consolation goal for Ottawa.

Notes: Toronto was still without winger William Nylander due to NHL COVID-19 protocol. â€¦ The Leafs and Senators had their ninth and final meeting of 2021 in Ottawa moved from May 10 to May 12 as part of the NHL's rejigging of the North Division schedule following the Vancouver Canucks' coronavirus outbreak.