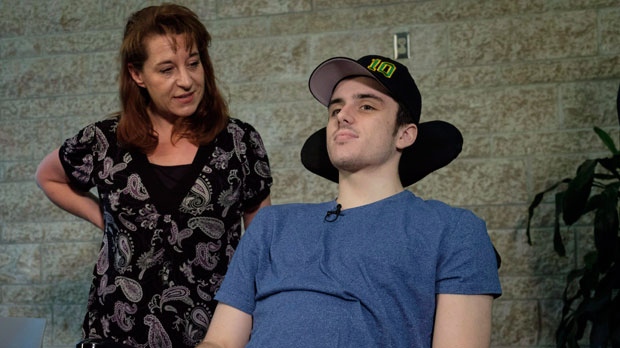 Humboldt Broncos hockey player Ryan Straschnitzki, who was paralyzed following a bus crash that killed 16 people, speaks to the media as his mother Michelle, looks on in Calgary, Alta., Wednesday, April 25, 2018.THE CANADIAN PRESS/Jeff McIntosh

SASKATOON -- The author of a book about the Humboldt Broncos and the deadly bus crash that rocked the junior hockey team says he had good intentions in choosing to publish the story.

The crash in April killed 16 people and injured 13 more when the team bus collided with a semi-truck at a rural intersection in Saskatchewan.

"Humble Beginnings of the Humboldt Broncos and the 2017-2018 Team," written by Barry Heath, came out last month. Several people who lost loved ones in the wreck say they didn't want the book published and have asked people not to buy it.

Heath, a former veterinarian and community coroner, said he is sorry some of families believe they had to give him permission to celebrate their loved ones. He said he relied on media interviews with family members and others to "capture and retell the beautiful memories of lives lost and changed."

Michelle Straschnitzki, whose son Ryan was paralyzed in the crash, said most of the families weren't ready and didn't want to participate in the book. She said the team's president at the time also asked Heath not to write it.