TORONTO -- Brendan Shanahan's first conversation with Mike Babcock about the Toronto Maple Leafs' vacant coaching position was more of a disclaimer than a sales pitch. The club president wanted Babcock to know how far away the Leafs are from being a winning team.

The most sought-after free-agent coach in the NHL could have stayed with the Detroit Red Wings or picked the up-and-coming Buffalo Sabres, who pitched a deal that wasn't far off the US$50 million and eight years he got from the Leafs.

"When people were talking about him during this process that why would he take on a challenge this big, my view was that was not our greatest weakness," Shanahan said Thursday. "It was potentially our greatest strength, just in knowing the man, that our mountain was the biggest, that we were starting behind the others, that he was coming in at the ground floor."

The 52-year-old Babcock already overcame his own fear to win gold for Canada at the world junior championship, world championship and twice at the Olympics, including in 2010 on home ice in Vancouver. He took a "leap of faith" to join the Red Wings 10 years ago and won a Stanley Cup.

But trying to build the Leafs from perennial losers into Stanley Cup contenders is far and away his biggest undertaking.

"I've had a lot of opportunity to coach Canada's teams and enjoyed that immensely," Babcock said. "Whether you believe it or not, I believe this is Canada's team and we need to put Canada's team back on the map."

The Leafs have missed the playoffs nine of the past 10 seasons, and Babcock predicted "there's going to be pain" in the near future. Saying he took the job with "eyes wide open," the allure of coaching in hockey's biggest market and being part of a full-scale process made it worth the upcoming suffering.

"Lots of teams we talked to were set up better," Babcock said. "But they weren't the Maple Leafs and they weren't in this city."

Babcock narrowed his pool of suitors to the Leafs, Sabres and Red Wings before finally deciding Wednesday.

Television stations filmed the plane's arrival at the airport, and his image was plastered on the video screen outside Air Canada Centre with the message: "Welcome to Toronto, Mike." Media members and MLSE employees packed the concourse for his introduction as some fans looked through the glass from the street trying to catch a glimpse of the Leafs' next big hope.

Inside, there were no mentions of the franchise's Cup drought that dates to 1967 or any promises that it would end soon, only talk of the long-term plan set forth by Shanahan last month when he fired general manager Dave Nonis. After expressing frustration recently that the Red Wings were too good for too long to build up young talent needed for a championship run, Babcock insisted he's all-in with the Leafs.

"I never came here to make the playoffs, I came here to be involved in a Cup process," said Babcock, who managed to talk up his skills without seeming full of himself. "I have a burning desire to win. But I also want to win in the end."

Babcock hasn't won it all in the NHL since lifting the Cup with Detroit in 2008, and that organization's success started with GM Ken Holland and pre-dated his coaching. If the Leafs manage to tear down, build back up and get the job done, Babcock's fingerprints will be all over it.

"I look forward to the process, the battle, the pain, the fun, the journey," said Babcock, who brushed off the fame that would come with bringing a title to Toronto. "It's going to be a long one, but it's going to be a lot of fun."

Losing at first may not be a lot of fun, with or without captain Dion Phaneuf, star winger Phil Kessel or other pieces of the Leafs' core who seemed to be ticketed for off-season trades. The Leafs finished second-last in the Eastern Conference with 68 points this past season, a year after collapsing late to miss the playoffs and two years removed from a memorable Game 7 collapse in the first round.

Those failures led Shanahan to fire Nonis, coaches Randy Carlyle and Peter Horachek, several assistants and many scouts and lay out a multi-year plan. It's his hope having Babcock behind the bench can help build a foundation of winning for young players like defenceman Morgan Rielly, centre Nazem Kadri and prospect William Nylander.

Before Babcock gets his chance to coach them, Shanahan said he'll hire a GM "if" one fits, leaving the door open that assistants Mark Hunter or Kyle Dubas could get the job.

Whoever is making roster moves will be doing them with an eye on the future. Babcock could have won now with the St. Louis Blues or perhaps sooner with the Sabres or Red Wings, but made sure in talks with Shanahan and ownership that the Leafs were committed to winning the right way. 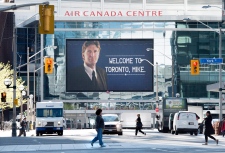 A sign welcoming Mike Babcock as the new head coach of the Toronto Maple Leafs is displayed at the Air Canada Centre in Toronto on Thursday, May 21, 2015. THE CANADIAN PRESS/Darren Calabrese