TORONTO -- The Pan Am Games kicked off with an audacious flourish Friday, featuring a dazzling Cirque du Soleil production, a constellation of the country's most accomplished sports stars and the indelible visual of Canada's fastest man Donovan Bailey appearing to base-jump from Canada's tallest structure, the CN Tower.

It was not the only sky-reaching moment in a spare-no-spectacle opening ceremony that rivalled -- or topped -- the scale and sizzle of the memorable launch of the 2010 Vancouver Olympics with an inclusive, youthfully skewed presentation that adorned its Cirque wizardry with a cavalcade of famous faces.

Organizers followed through on a promise to cater the presentation to a younger generation of viewers who might have anticipated a stodgier production.

The opening sequence found A Tribe Called Red's DJ Shub twisting vinyl on elevated turntables as 183 vibrantly clad dancers nodded to the city's diversity with a "Powwow Carnival" that sought to incorporate choreography from countless cultures.

Cirque's production featured at various points a fleet of BMX cyclists hurtling up and over ramps, a cheeky sequence of jukebox-based choreography set to a mashup of semi-recent pop tunes and abstractly edgy multimedia accompaniments beamed imagery that was by turns soothing or ripped from a dystopian-future sci-fi flick.

Even the mandatory elements of the ceremony were buffed to a slick finish.

The raising of the flag was accompanied by a performance from Grammy-winning Canadian pianist Chilly Gonzales (a collaborator of Daft Punk, Feist and Drake), while the parade of nations -- during which flag-bearer Mark Oldershaw led the biggest Canadian team ever assembled -- was marked by an insistently pounding EDM score paying tribute to the unique sound of each of the 41 competing countries, the names of which were beamed through gaudy LED screens.

The vibrant core of the presentation, however, was provided by a frequently awe-inspiring presentation from Cirque du Soleil with an oblique plot intended to pay tribute to the region's First Nations population and its rich history.

Even without pondering the ornately costumed performance's thematic messaging, it was a sensory feast that encompassed 625 performers, 47 makeup artists, 530 costumes crafted from 600 metres of fabric and 1,000 laborious hours of rehearsal spread over 22 weeks.

A forest sequence soundtracked by ethereal cooing featured dancers incubated in sparkling spheres, rising and descending high above the stage. Later, a 25-metre strip of towering fire bisected the stage, with 53 hip-hop dancers on each side, before eight tumblers initiated a series of scalp-scorching flips over the flames.

Another sequence featured an aerial contortionist cavorting 15 metres in the air, the stage draped in 14 pieces of fabric billowing 30 metres wide. A storm motif incorporated acrobats clinging to 10-metre-high ladders while the show-stealing BMX sequence was furthered by the efforts of three bungee-plunging aerialists dressed as airline pilots.

Impressive though the spectacle was, perhaps a more moving story was conveyed with the simple journey of the torch.

The flame first flickered into view early in the show with a pre-recorded bit that depicted Canada's Olympic gold medal-winning 4x100-metre relay team from the 1996 Atlanta Games ushering the fire towards the venue one by one, with Carlton Chambers preceding Robert Esmie, who preceded Glenroy Gilbert.

Gilbert then touched the flame to the base of the CN Tower, sparking a series of popping pyrotechnics that symbolically lifted the fire up to Bruny Surin -- who was bravely trotting around the apex of the 553-metre high structure to the appreciative applause of those inside.

Finally, he arrived at a hooded Bailey, who lifted his veil and was depicted flinging himself off the structure, popping his parachute and fluttering to the dome's roof. Though the stunt was taped, the crowd gasped gratefully. As the recording segued into reality, Bailey descended from the roof, flame in hand, serenaded by applause.

Surrounded by his relay-mates, he passed the fire on to 15-year-old Canadian diver Faith Zacharias, who left the torch in its mid-stage resting place.

It wasn't until the grand conclusion that the flame again became the centre of attention.

Zacharias returned to light a new torch held by Olympic silver medallist runner Dana Wright, who cycled the flame through to torches clutched by the remaining members of her relay team: Charmaine Crooks, Jillian Richardson, Molly Killingbeck and Marita Payne-Wiggins.

Payne-Wiggins then walked over and ignited a torch held by her son, the NBA's locally reared reigning rookie of the year Andrew Wiggins.

He then jogged up the aisle and into the audience where he met the final torchbearer: fellow basketball star Steve Nash.

The Victoria product then trotted outside the venue, through hundreds of applauding onlookers, and finally dipped the torch, setting the Pan Am cauldron at the base of the CN Tower alight. 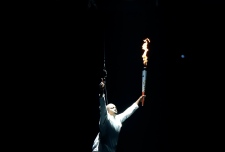 Retired Canadian sprinter Donovan Bailey is lowered to the stage with the Pan Am torch during the opening ceremony of the 2015 Pan Am Games in Toronto Friday, July 10, 2015. (AP Photo/Julio Cortez)