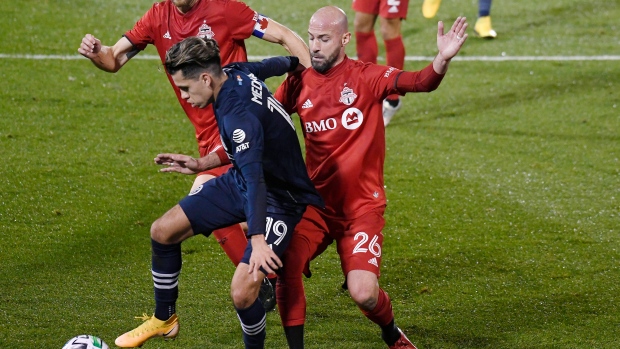 It marked the first loss in five outings (3-1-1) for Toronto at Pratt and Whitney Stadium at Rentschler Field, its pandemic home away from home.

Toronto (12-4-5), whose understrength lineup was thumped 5-0 in Philadelphia on the weekend, was still missing a half-dozen starters due to injury or suspension. The pain continued Wednesday for Toronto, which has not scored in 181 minutes and was outplayed on the night.

NYCFC (10-8-3) should have won by more. It had plenty of chances but lacked clinical finishing. At the other end, New York 'keeper Sean Johnson should have brought a magazine to the game.

The lopsided loss to Philadelphia marked the end of TFC's nine-game unbeaten run (7-0-2) and dropped it behind the Union on goal difference in the Supporters' Shield race.

Philadelphia played at Chicago on Wednesday.

The New Yorkers had 64 percent of possession in the first half Wednesday, coming at Toronto in waves. But they failed to turn that into goals despite some unconvincing Toronto defending.

NYCFC managed just one shot on target in the first half which ended with Toronto's Nick DeLeon hammering a shot off the NYFC goalpost from just outside the penalty box in stoppage time.

But too often, Toronto players were caught chasing the NYCFC attack.

The breakthrough came in the 51st minute when Quentin Westberg could not hold onto a swerving Valentin Castellanos shot and Medina was first to the rebound to knock it in. The Toronto defence had backed off Castellanos before he took the shot from outside the penalty box.

Toronto pushed forward as the second half wound down but rarely looked convincing until the final minutes when New York had closed up shop. Medina had a gilt-edged chance to double the lead in the 74th minute but missed the target.

NYCFC beat visiting Montreal 3-1 last time out to snap a three-game winless streak and, thanks to the Impact's loss Tuesday to Nashville, clinched a playoff spot for the first straight season. The New Yorkers stood fifth in the East going into Wednesday's game.

Auro was suspended for yellow card accumulation while Delgado was feeling hip/glute discomfort from the Philadelphia game.

Centre back Chris Mavinga and Eriq Zavaleta made the bench after injury absences. Striker Ayo Akinola and midfielder Jonathan Osorio were not ready, however, and did not dress.

Defender Maxime Chanot and Castellanos returned from suspension for NYCFC. Libyan forward Ismael Tajouri-Shradi was out after announcing on social media that he has tested positive for COVID-19.

Toronto was found wanting early, saved by the offside flag when diminutive Argentine playmaker Maxi Moralez scored within 50 seconds. Morrow, playing a more advanced midfield role, was booked in the third minute for a crude challenge on Anton Tinnerholm.

Alejandro Pozuelo set Morrow free in the eight minute with a wonderful ball from just inside the Toronto half but Chanot got a foot in the way of Morrow's shot.

Westberg made another fine save on Gary Mackay-Steven in the 33rd minute as the offside flag went up.

Vanney brought on Jacob Shaffelburg and Endoh around the hour-mark, moving Pozuelo into a false No. 9 position. A poor backpass by Richie Laryea almost caught Toronto out but Westberg, out of his goal, swept the ball away before a NYCFC player got to it.

Castellanos missed again in the 77th minute after dodging Westberg near the post.

There was some bad blood in stoppage time when Toronto defender Omar Gonzalez ran over Johnson.

TFC hosts Inter Miami on Sunday in East Hartford in a game that will feature a limited number of spectators. Toronto finishes out the regular season Nov. 8 at the New York Red Bulls.