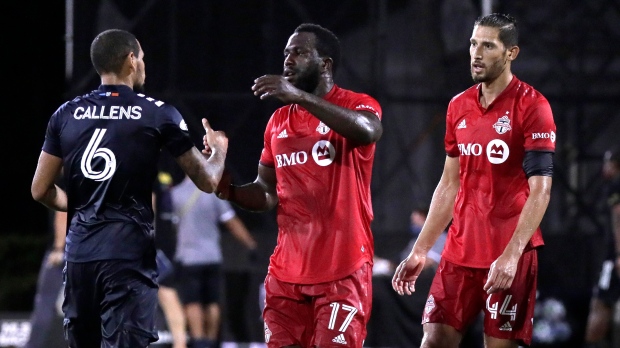 Toronto, which won Group C while NYCFC needed help from others to advance to the knockout round after finishing third in Group A, was second-best most of the night. TFC looked tired and short on ideas against a hungry NYCFC side.

The two teams have history with Toronto knocking the New Yorkers out of the playoffs in 2016 and 2019.

Substitute Patrick Mullins added a consolation goal for Toronto in the 87th minute.

NYCFC will face either the Portland Timbers or FC Cincinnati in quarterfinal action next Saturday. Portland-Cincinnati meet Tuesday.

NYCFC went ahead in the fifth minute after some sloppy Toronto defending on a Ronald Matarrita free kick, needlessly given away by Alejandro Pozuelo off a Toronto throw-in.

Michael Bradley's attempted clearance went straight to Anton Tinnerholm with teenager Jayden Nelson unable to close him down. Tinnerholm found an unmarked Medina whose low shot went through goalkeeper Quentin Westberg's hands. It marked the first time Toronto had gone behind in four games at the tournament.

Castellanos made it 2-0 in the 55th minute, outpacing Omar Gonzalez to a looping ball from Moralez and then rounding the centre back to fire a shot into the corner. Westberg got a hand to the ball but could not keep it out.

Brazilian fullback Auro was out of position after conceding the foul that started the play.

With Toronto pressing for a goal, NYCFC added to its lead in the 81st minute on a counter-attack with Moralez beating Westberg after being put in alone.

Mullins scored in the 87th minute, taking a cushioned header from Jozy Altidore off a Jacob Shaffelburg cross before beating Sean Johnson.

Brazil's Heber, sent in alone, hit the Toronto crossbar with a chip in stoppage time. Seconds later he did it again, with his shot deflecting off a defender and the woodwork.

Toronto's Ayo Akinola, who scored five goals in his first two games of the tournament, sat out the game with hamstring tightness. Nelson, a 17-year-old voted Canadian Youth International Player of the Year in 2019, moved into the starting lineup with Pozuelo playing as a false No. 9.

It marked the Toronto FC and MLS competition debut for Nelson. Unlike the three group games, the knockout rounds at the tournament do not count in the regular season.

Altidore, who made his tournament debut last time in the 86th minute against New England, and Canadian midfielder Jonathan Osorio, who missed the first three games with a quad issue, started on the bench.

Westberg, Toronto's No. 1 'keeper, returned to the lineup after being rested against New England.

New York defender Alexander Callens had a free header off a 16th-minute Matarrita free kick but failed to find the target.

New York lost attacking mdfielder Ismael Tajouri-Shradi in the 27th minute when he went down clutching the back of his leg. He was replaced by Moralez, who has been dealing with a quad issue at the tournament.

Westberg got an arm to a Medina shot in the 34th minute after the Toronto defence was carved open on a rapid-fire counter-attack triggered by a Pozuelo giveaway.

Toronto threatened in the 45th minute but an acrobatic Johnson punched a cross away to end the threat.

While Toronto had 60 per cent of the possession in the first half, it failed to put a shot on target in six attempts.

“We've got to take it to another speed, intensity-wise, everything. It's just too slow,” Toronto coach Greg Vanney said in a halftime interview.

New York wanted a penalty early in the second half when Tinnerholm tangled with Richie Laryea in the box but no call was given.

Vanney sent on Altidore, Osorio and Erickson Gallardo in the 57th minute. Shaffelburg and Mullins followed off the bench as Vanney looked for some offence.

Nelson, whose rise through the ranks has been swift, had a quiet 57 minutes although he showed flashes of his speed and industry.

He made his pro debut with Toronto FC 2 in last April, turned 17 in September, represented Canada at the FIFA U-17 World Cup in October/November and was named Canadian Youth International Player of the Year in December. He kicked off 2020 by making his senior debut Jan. 7 and scoring his first goal three days later - in a pair of 4-1 wins over Barbados.

Toronto had gone unbeaten in its five previous games this season (2-0-3), including a 1-0 win over NYCFC in its home opener March 7.