Belgium ranked no. 1 in first FIFA ranking since pandemic 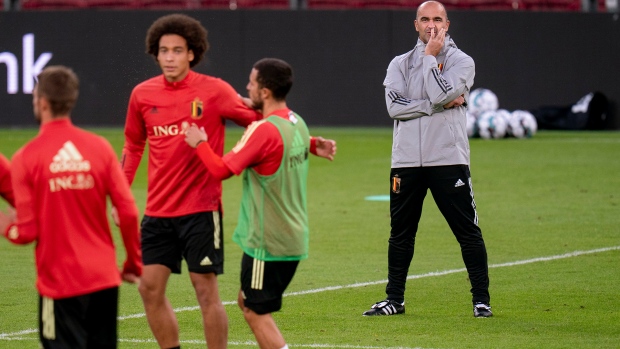 Belgium's coach Roberto Martínez, right, watches as his team take part in a training session ahead of the UEFA Nations League soccer match against Sweden on Saturday, at Parken Stadium, in Copenhagen, Denmark, Friday Sep. 4, 2020. (Liselotte Sabroe/Ritzau Scanpix via AP)

ZURICH -- The first FIFA men's world rankings for five months were still led by Belgium on Thursday after the shutdown of European teams during the coronavirus pandemic ended in September.

Belgium leads an unchanged top four nations from 2018 World Cup winner France, Brazil -- which has yet to play in 2020 -- and England.

Rankings after the November international break will decide seedings when FIFA draws the European qualifying groups for the 2022 World Cup in early December.

The 10 highest-ranked European teams will be top-seeded in groups where only the winner will advance directly to the finals tournament in Qatar. Three more teams will qualify through playoffs scheduled in March 2022.

Currently, Germany is the ninth-best European ranked No. 14, and No. 15 Switzerland would take the last top-seeded place in the draw. Denmark is next at No. 16.

Senegal is the top-ranked African nation at No. 20, and No. 28 Japan leads Asian confederation teams.