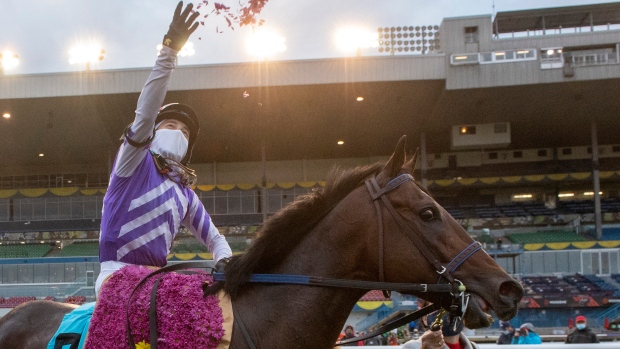 Jockey Luis Contreras celebrates by throwing flowers aboard Belichick after winning the Breeders' Stakes at Woodbine Racetrack in Toronto on Saturday October 24, 2020. THE CANADIAN PRESS/Frank Gunn

TORONTO - Josie Carroll completed the Triple Crown sweep Saturday, just not the one that mattered.

The Carroll-trained Belichick claimed the $400,000 Breeders' Stakes at Woodbine Racetrack for his first career victory. But it came at the expense of stablemate Mighty Heart, the one-eyed colt that was looking to become the first OLG Canadian Triple Crown winner since Wando in 2003.

“Very (bittersweet),” Carroll said. “It's very exciting to win with this horse, he's a horse I've said had a lot of promise from the beginning.

“But how often do you get the opportunity to win a Triple Crown? I thought Mighty Heart ran his little heart out. Unfortunately he was hooked all the way with that one horse and never got a chance to relax.”

Jockey Daisuke Fukumoto took Mighty Heart, the even-money favourite, to the lead from the start, which like he did in the $1-million Queen's Plate that his horse ended up winning by a whopping 7 1/2 lengths ahead of Belichick as a 13/1 longshot. But Kunal, and jockey Emile Ramsammy, kept pace with Mighty Heart for three-quarters of a mile.

Mighty Heart still held the lead after a mile, and while Kunal had dropped back to seventh, Told It All was giving Mighty Heart chase in second. Not having the chance to relax and settle in then took its toll on Mighty Heart, who simply ran out of steam and finished seventh.

“He was sharp like in the Queen's Plate,” he said. “I tried to take hold and he relaxed a little bit in the backstretch but with the mile and a half you need the stamina . . . he got tired.

“He gave me many experiences and I'm so proud of him. I want everyone to keep following him when he runs again next time.”

Contreras - who in 2011 won all three Triple Crown races with two horses - had Belichick sitting eighth at the start and moved him up to fourth after a mile. The 3/1 second pick surged into the lead with a quarter-mile remaining and posted an impressive four-length victory in 2:32.51 on a good turf.

“It's a hell of a way to break your maiden,” Carroll said. “I've said all along this was a good horse, I wasn't surprised to see him jump up today.

“He's still lightly raced and he's a big, rangy horse that's still growing into himself. I don't think he's even done growing yet.”

Contreras, who won his third Breeders' title, said after a somewhat difficult start, Belichick settled in and had plenty left when it counted most.

“They kind of broke early in the race so I just tried to see them and relax my horse as much as I could,” he said. “He was very uncomfortable, this horse has a different style to run so I just let him be happy wherever he wanted to be.

“Turning for home, I was just in hand all the way to the quarter pole. I asked him to run from the stretch home and he did.”

Meyer, a 54/1 longshot ridden by Sahin Civaci, finished second ahead of English Conqueror, a 12/1 pick that was supplemented for this race and ridden by Emma-Jayne Wilson.

The field was reduced to 11 horses after Olliemyboy was scratched earlier Saturday.

The remainder of the field, in order of finish, included: Deviant; Clayton; Enchant Me; Mighty Heart; Muskoka Giant; Told It All; Glorious Tribute; and Kunal.

Carroll had expressed concern last week about a potentially soft turf course given all the rain the fell in the Greater Toronto Area. However, she said the surface wasn't a major factor in Saturday's race.

“I went up on it this morning and Woodbine did a really good job on this turf,” she said. “It was a good course.

“It had a little cut to it but there's nothing wrong with a little give on the turf. It really wasn't that soft of a turf.”

Belichick has now finished in the money in all four of his career races (win, twice second, third) and received $240,000 for Saturday's victory.

“Mighty Heart is the little scrapper but Belichick, he's just a dude,” Carroll said. “He can be really, really laid back but he's also full of himself.

“He knows who he is and climbs all over top of the people when they're trying to walk him. He just always has to assert himself.”