Bench bosses on the bubble: Keefe, Boudreau among NHL coaches at risk this season 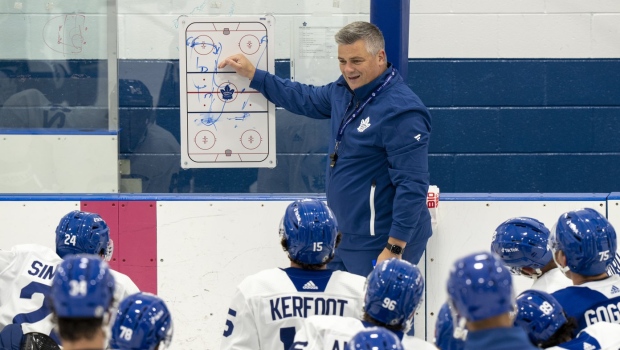 Players aren't the only ones feeling pressure as the NHL season gets underway.

The men behind the bench know their jobs depend on their team's performance, too. Life as an NHL head coach can be precarious, and last season, seven teams across the league opted to swap their bench boss midseason.

Here's a look at six head coaches who could be in trouble as the 2022-23 campaign gets underway.

The Canucks closed out their season with a 31-15-10 run after Boudreau took over in December, prompting crowds in Vancouver to chant "Bruce, there it is!" to the tune of Tag Team's "Whoomp! (There it is)." The performance wasn't enough, though, for Vancouver to clinch a playoff spot and the coach received just a one-year contract extension in response. To keep the gig, Boudreau will need to impress general manager Patrik Allvin and president of hockey operations Jim Rutherford with a solid start this year.

Expectations have grown for the Ducks as youngsters like Trevor Zegras, Troy Terry and Mason McTavish grow into their roles as emerging NHL stars. Anaheim's front office showed it's serious about taking the next step this summer, signing Ryan Strome, Frank Vatrano and John Klingberg as free agents. Now in his fourth season as head coach, Eakins needs to harness all that talent and guide Anaheim to its first playoff appearance since 2018.

Wins haven't been an issue over Keefe's first three seasons as head coach of the Maple Leafs. It's a deep playoff run that remains elusive. Toronto has a 116-50-19 regular-season record during his tenure as head coach and, for the last two seasons, has boasted the league's top goal scorer in Auston Matthews. Toronto hasn't made it out of the first round of the playoffs under Keefe, though, and playoff success this season will be key to his ability to remain behind the bench.

As long as Alex Ovechkin is playing, the Capitals are expected to be a Stanley Cup contender. But Washington hasn't made it out of the first round of the playoffs in Laviolette's two seasons at the helm. The veteran head coach has a 80-41-17 regular-season record with the 'Caps and needs to find a way to translate that success in the post-season if he wants to bring another championship to Washington — and secure his future with the team.

Ottawa went big over the off-season, acquiring big names like winger Alex DeBrincat and veteran Claude Giroux. Now it's time for Smith to blend the top talent with an up-and-coming roster featuring the likes of Brady Tkachuk and Tim Stutzle, and guide the Sens to their first post-season appearance since 2017. The Sens haven't posted a winning record in Smith's three seasons in charge, and his job could be on the line if the trend continues.

There was speculation that Ruff would be out of a job after the Devils finished last season with a 27-46-9 record and missed the playoffs for the second year in a row. Star centre Jack Hughes spoke out in favour of keeping the coach in May and now Ruff is returning for his third season behind New Jersey's bench. Pressure hasn't dissipated for the former Jack Adams Award winner heading into the new campaign, however, and a slow start could mean an end to Ruff's reign.