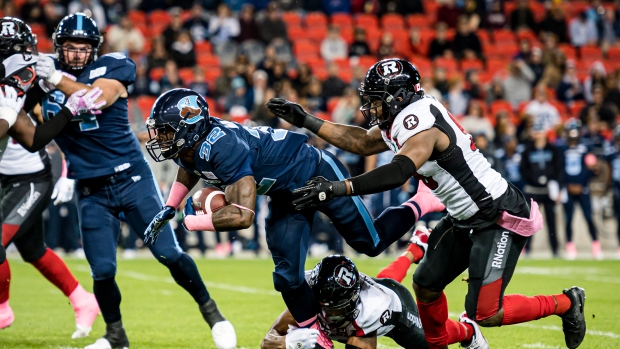 TORONTO - McLeod Bethel-Thompson threw two touchdown passes as the Toronto Argonauts held on for a 28-21 home win over the Ottawa Redblacks to snap a three-game losing streak Friday night.

And in his first CFL start Aug. 2, 2018, Bethel-Thompson threw for 302 yards with four TDs in rallying Toronto to a thrilling 42-41 home victory over Ottawa. Bethel-Thompson has now thrown a CFL-best 22 touchdown passes.

The Argos had already been eliminated from the CFL playoffs. They delighted an announced BMO Field gathering of 10,368 by handing Ottawa an eighth straight loss and quashing its post-season aspirations.

It was a historic night for Toronto receiver S.J. Green, who achieved two career milestones. The 13-year veteran finished with 10 catches for 170 yards to crack both 700-catch and 10,000-yard plateaus, becoming the 14th and 18th player, respectively, to register those lofty achievements.

Toronto was victorious in its first game since the front-office shuffle that saw Mike (Pinball) Clemons replace Jim Popp as general manager Tuesday.

Ottawa rookie Will Arndt finished 28-of-42 passing for 293 yards with two TDs and three interceptions. He was also sacked four times in his first CFL start.

But Ottawa made it interesting, pulling to within 28-21 on Lewis Ward's 50-yard field goal with 1:35 remaining. It came after Arndt's 15-yard scoring strike to Dominique Rhymes at 12:22 of the fourth and then the Redblacks recovered the onside kick.

Ottawa got the ball back one last time at its 32-yard line with nine seconds remaining however Tobi Antigha ended the threat with his second pick of the game.

Tyler Crapigna's 33-yard field goal at 13:08 of the third put Toronto ahead 27-10 but capped a huge momentum swing for the home team. Ottawa took the ball at the Argos' 28-yard line when returner Chris Rainey was flagged for unnecessary roughness after steamrolling Nigel Ronick on a Jonathon Jennings pass during a fake field goal attempt.

But Antigha intercepted Arndt on Ottawa's next play. His 45-yard return gave Toronto possession on the Redblacks' 40-yard line.

Arndt's first CFL touchdown pass, eight yards to R.J. Harris, pulled Ottawa to within 17-10 just 3:25 into the third. It was set up by Brandin Dandridge's recovery of an onside kick to open the second half.

But Toronto countered with Bethel-Thompson's eight-yard TD strike to Armanti Edwards at 6:59 to restore its 14-point advantage (24-10).

Bethel-Thompson staked Toronto to a 17-3 half-time advantage. He found Edwards on a 15-yard scoring strike at 14:51 of the second quarter, capping a smart 72-yard, eight-play scoring march.

Franklin put Toronto ahead 10-3 with a one-yard TD run on third down at 11:02. The Argos' 82-yard, nine-play drive was aided by two Ottawa pass interference calls.

This report by The Canadian Press was originally published Oct. 11, 2019.