Bianca Andreescu gets prime-time slot for quarterfinals at U.S. Open 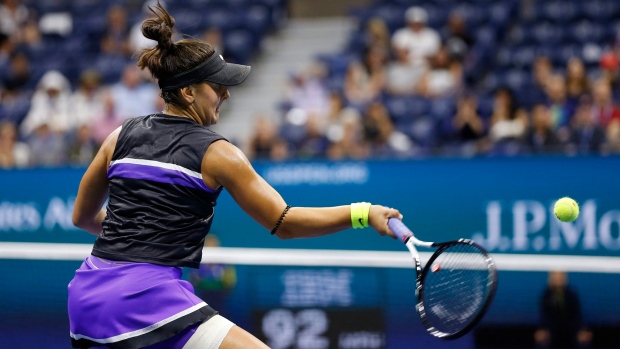 Bianca Andreescu, of Canada, returns a shot to Taylor Townsend, of the United States, during the fourth round of the U.S. Open tennis tournament, Monday, Sept. 2, 2019, in New York. Andreescu is two wins away from making the final in her first appearance at the U.S. Open. THE CANADIAN PRESS/AP-Jason DeCrow

NEW YORK -- Bianca Andreescu is returning to prime time at the U.S. Open.

The Canadian teen tennis star will play in the evening draw for the second match in a row when she faces Elise Mertens of Belgium in a quarterfinal on Wednesday night at Arthur Ashe Stadium.

This time, though, Andreescu will be in the early evening match, starting at 7 p.m. ET. On Monday, her match against American Taylor Townsend didn't start until about 10:30 p.m., and didn't end until early Tuesday morning after the preceding men's clash between Rafael Nadal and Marin Cilic went four sets.

On Wednesday, Nadal's quarterfinal will follow the Andreescu-Martens contest.

It marks the third match in a row for the 19-year-old Andreescu at the largest stadium at the facility. Arthur Ashe Stadium seats just under 24,000 people.

Andreescu, the No. 15 seed from Mississauga, Ont., is making her first appearance at the U.S. Open. She's the first Canadian man or woman to reach the quarterfinals of the final Grand Slam of the season in singles since Patricia Hy-Boulais in 1992.

Andreescu has rocketed up the rankings this year, winning tournaments just below the Grand Slam level in Indian Wells, Calif., and Toronto.