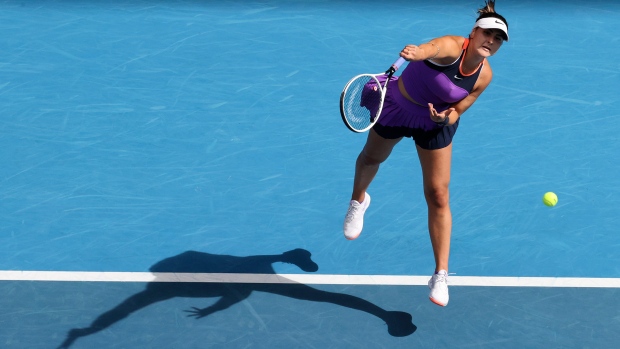 Canada's Bianca Andreescu survived a tough first-round match at the Australian Open on Monday in her first competitive appearance in 15 months.

She defeated Romania's Mihaela Buzarnescu 6-2, 4-6, 6-3 in a challenging opener at Melbourne Park.

“I feel pretty damn good,” Andreescu said afterwards in an on-court interview. “I mean today's match wasn't easy at all and I'm super, super happy with how I fought it out, especially towards the end.”

The 20-year-old from Mississauga, Ont., looked like she hadn't missed a beat in a tidy opening set that lasted just half an hour.

Buzarnescu, a former top-20 player, showed her mettle by rebounding in the second set, matching Andreescu's pace and power from the baseline.

But like she did throughout her breakout 2019 season, Andreescu seemed to find another gear in the big moments of the deciding set.

Serving at 3-3 and down three break points, Andreescu reeled off five points in a row for the hold. She followed that with a service break and then served out for the match, delivering an overhead smash on match point.

Andreescu will play Taiwan's Hsieh Su-Wei in the second round.

Ranked outside the top 150 prior to 2019, Andreescu won three tournaments that year and became one of the biggest stars in the sport. A win over Serena Williams at the U.S. Open made Andreescu Canada's first Grand Slam singles champion.

Seeded eighth in Melbourne, Andreescu appeared to get a favourable opening matchup in drawing the 138th-ranked Buzarnescu. But the veteran left-hander gave Andreescu all she could handle.

It was Andreescu's first match since suffering a torn left meniscus at the WTA Tour finals in October 2019. The injury hampered her in early 2020 and she declined to return when the WTA Tour resumed play after taking a break due to the pandemic.

Andreescu appeared quite comfortable on court and was moving well. She mixed her shots up nicely to keep Buzarnescu off balance.

Unforced errors were rather high for both players - Andreescu had 34 compared to 29 for her opponent - but the Canadian had a 27-11 edge in winners.

Andreescu was aggressive at times and it paid off in the opening set. Buzarnescu went for more shots in the second set and forced Andreescu into a more defensive posture.

Down 3-4 in the decider, Buzarnescu fired a shot long on break point and Andreescu went on to complete the win in two hours two minutes.

After a two-week hard quarantine upon arrival in Melbourne, Andreescu pulled out of a warmup tournament last week on the eve of the competition. She decided instead to maximize her practice and training time for the first Grand Slam of the 2021 season.

Andreescu enjoyed a meteoric rise in 2019 after starting the season ranked No. 152 in the world. She closed the year at No. 5 despite missing some time throughout the season due to injuries.