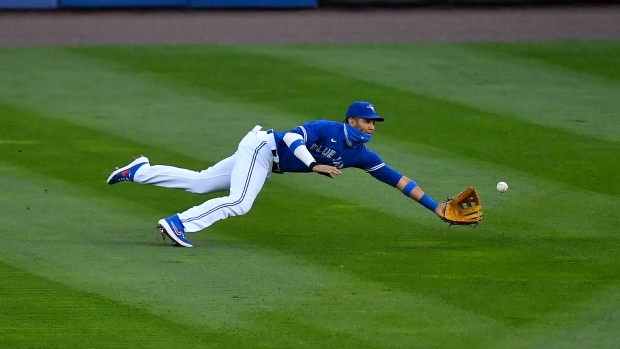 BUFFALO, N.Y. - Bo Bichette singled and scored in a successful return to the Toronto lineup and Alejandro Kirk also got a hit and scored in his big league debut Saturday night as the Blue Jays beat the New York Mets 3-2.

Bichette, who missed 27 games with a right knee sprain, was activated from the injured list and extended his hitting streak to 10 games. The shortstop is batting .354 this season.

Kirk, a 21-year old catcher who hadn't played above Single-A, singled in the sixth inning. He also drew a walk.

Robbie Ray (2-4) struck out five over five innings for his first win since being acquired from Arizona in a trade on Aug. 31. He allowed one run and helped Toronto hold its half-game lead over the New York Yankees for second place in the AL East.

Rafael Dolis got his fourth save, picking Amed Rosario off first base for the final out. The original call was overturned by the sixth video review of the game.

Randal Grichuk and Jonathan Villar had RBI singles and Travis Shaw lofted a sacrifice fly for Toronto, which lost to the Mets 18-1 on Friday night.

Rosario had three hits. He struck out in the ninth, but reached first base on a wild pitch.

Jake Marisnick hit an RBI double in the fourth that put the Mets ahead. Toronto tied it in the bottom half.

Bichette led off with a sharp single and appeared to score on Shaw's double, but replays ruled that the ball wedged at the bottom of the wall at right-centre. Umpires placed Bichette back at third, and he scored on Grichuk's infield single.

Vladimir Guerrero Jr. hit a comebacker and Lugo sprinted to third to narrowly retire Shaw, an outcome verified after another video review.

Toronto grabbed a 2-1 lead in the fifth when Shaw's sacrifice fly scored Kirk, and made it 3-1 in the sixth on Villar's single.

New York got closer in the seventh on an RBI grounder by J.D. Davis.

Kirk batted .290 in 92 games in 2019 at two Class A stops and was added to Toronto's active roster on Friday after spending a couple of weeks on the taxi squad.

Toronto's Cavan Biggio drew a walk to load the bases in the sixth inning. It was the 100th free pass of his career and made him the ninth player in MLB history to reach that milestone in 145 or fewer games. The most recent instance was when Carlos Santana drew his 100th walk in his 132nd game in 2011.

Mets: Marisnick left the game with tightness in his right hamstring, replaced by Brandon Nimmo in the sixth inning. Marisnick spent time on the injured list earlier in the season with a strained left hamstring, and is batting .417 (10 of 24) in eight games since his return on Aug. 28.

Blue Jays: OF Teoscar Hernandez (strained oblique) began to hit off a tee and 1B Rowdy Tellez (knee strain) started riding a bike.

Mets LHP David Peterson (4-1, 4.26 ERA), who worked two innings in the shortest start of his career on Monday, will start the series finale on Sunday against Blue Jays LHP Hyun Jin Ryu (3-1, 3.19), who has a 1.20 ERA in eight career starts against New York.