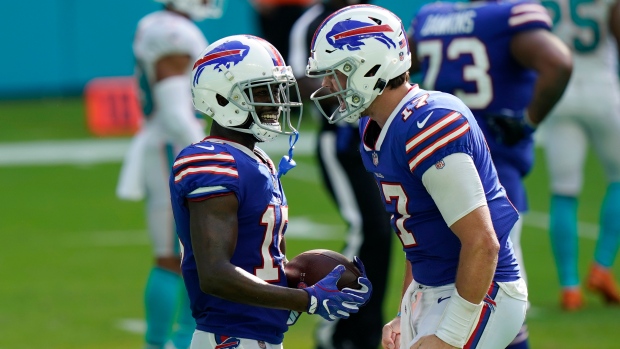 Quarterback Josh Allen and the Buffalo Bills -- a team previously known for having a defence-first reputation -- have suddenly captured the Los Angeles Rams coach's attention as the teams prepare to play at Orchard Park, New York, on Sunday.

"A lot of mixture in personnel. A lot of different looks they can present," McVay said. "And Josh's ability to be able to beat you with his arms and legs and create off-schedule is a real winning edge. Man, I've been impressed with him the first couple of weeks."

It's early still, but the Bills (2-0) don't resemble the once-plodding, inconsistent offensive team which ranked in the bottom half of the NFL in yards gained for all but two of the past 17 seasons, including 24th last year.

Buffalo's offensive renaissance was apparent in a 31-28 come-from-behind win at Miami last week, when Allen had 417 yards passing and four touchdowns in becoming the team's fifth player to top 400 yards.

In making up for an injury-depleted defence missing two starting linebackers, the Bills snapped a 38-game skid going back to 2011 when allowing 28 or more points.

"He's a lot more comfortable back there, he's locked in," running back Devin Singletary said of Allen. "He's that general we're looking for."

The Rams, off to their third straight 2-0 start, are no pushovers on offence, either.

They've finished a season ranked no worse than 10th in yards gained since McVay took over in 2017, and have topped 400 yards in each of their first two outings.

Allen dismissed questions about a feud he's had with Rams cornerback Jalen Ramsey, who was with Jacksonville in 2018 when he called the quarterback "trash" in a magazine article. Ramsey questioned Allen's abilities coming out of Wyoming.

A year later, Allen signed a picture for a fan by writing, "Hey Ramsey ... Am I still trash?" to which Ramsey posted "Yes" on his Twitter account.

"That was so long ago in my opinion, and it's really a non-factor," Allen said Wednesday.

McVay wasn't aware of the taunt, but hoped Ramsey has changed his outlook.

"I can't speak for him, but I would say that one of the things that I really trust about Jalen is that he's got a great feel for the game," McVay said. "And I don't think there's any denying what Josh has put on tape."

Higbee has combined for 51 catches for 616 yards and five touchdowns -- half the fifth-year player's career total -- in his past seven games, going back to last season. He had a career-best three TDs in a 37-19 win at Philadelphia last weekend.

"I should've done it a lot sooner," McVay said. "You've just seen him continue to grow."

Bills coach Sean McDermott has a theory as to why Rams star defensive tackle Aaron Donald has been so disruptive in his six-plus NFL seasons.

"I think it's really one line: he was a wrestler," McDermott said, noting how Donald uses leverage to make up for his relatively small 6-foot-1, 280-pound frame.

McDermott, who might not break 200 pounds, was a championship wrestler in high school, and joked he was relieved he wasn't in someone like Donald's weight class.

Rams receiver Robert Woods has spent his entire life in Southern California except for his four-year stint with the Bills, who drafted him in 2013. He was a steady, productive receiver for Buffalo, and grew to love the fans' passion while learning to thrive in cold weather.

Woods also feels he has grown into an even better player back home than Buffalo ever saw. He put up more than 1,100 yards in each of the past two seasons.

"I grew to love Buffalo," Woods said. "Being from LA, going to USC, I never really got a chance to experience another city, especially another weather climate like that. So going to Buffalo, being in the snow, seeing the football culture there, I loved it. Real, true fans. A fun place to play. If you're not wearing Bills gear in the city, they're looking at you funny."

Instead of staying on the East Coast, the Rams returned to Southern California after beating the Eagles 37-19 in Philadelphia. McVay initially had planned to stay back East between games, but coronavirus protocols ultimately made it impractical to stay. The extensive travel could conceivably take its toll on the Rams, particularly with another kickoff at 10 a.m. California time, but McVay doesn't believe it will be a hindrance.

He even felt the decision to travel Saturday instead of Friday was helpful.

"It's only a challenge if we allow it to be," McVay said.