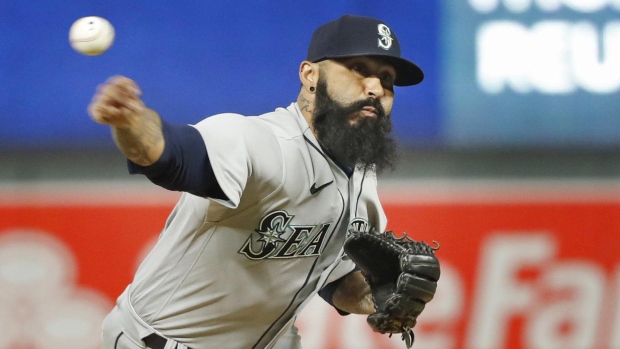 TORONTO - His activation not official until Wednesday, Blue Jays pitcher Sergio Romo watched from a stadium restaurant as his new team earned a walkoff victory over Boston a night earlier at Rogers Centre.

Enjoying a beverage on his own after passing his physical, the 39-year-old reliever - a three-time World Series champion with the San Francisco Giants - was impressed.

“Just the fight, these guys want to win and they expect to win,” Romo said in a pre-game media availability. “They showed it yesterday. Backs against the ropes and they still fought it out and it wasn't just on one shot either. It was a hit, a walk, this and that.

“Everyone contributed, so it was cool. It was fun to see and I'm glad I'm here.”

The Blue Jays agreed to terms with the right-hander on a one-year big-league contract. Toronto also optioned right-hander Shaun Anderson to Triple-A Buffalo and transferred left-hander Tayler Saucedo to the 60-day injured list.

Romo, who spent a month on the IL this season due to right shoulder inflammation, was recently released by Seattle after posting an 8.16 earned-run average in 17 games. He was 1-1 with a 4.67 ERA over 66 appearances last year for Oakland and has a 42-35 mark over his 15-year career with a 3.20 ERA.

“I come in here fearless, happy and appreciative, so let's go,” Romo said. “I'm hungry too. I want to win. I've been blessed with three rings. By the end of my career, I wouldn't mind being able to say there's four.”

It didn't take long for him to get settled in. An engaging, affable sort, Romo was holding court in the clubhouse with his new teammates before the finale of a three-game series against the Red Sox.

That kind of interaction may be where the Brawley, Calif., native is most valuable.

It's unclear how much gas he has left in the tank and what kind of leverage situation he'll be used in. But if his championship pedigree can rub off on a young team - even if it's just with a casual chat in the bullpen - then Romo could be an asset.

“I'm excited to add his experience, his skillset, his track record to the organization,” said general manager Ross Atkins. “I'm really excited about his mindset and I think our team is excited as well.”

The veteran right-hander also has history with Blue Jays manager Charlie Montoyo. Romo played for Tampa Bay over parts of two seasons ('17, '18) when Montoyo was on the Rays' coaching staff.

“Well you know he's not going to be nervous in any situation,” Montoyo said. “We know that for sure.”

After a wide-ranging 20-minute chat with reporters, Romo was all smiles as he threw balls in the outfield to bullpen catcher Alex Andreopoulos before the game.

“I'm noticing they've got this camaraderie here, plus the talent, plus the aspirations,” Romo said. “It's kind of hard not to be excited to be here.”