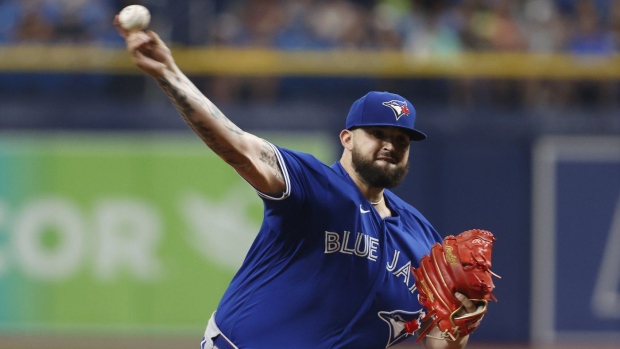 TORONTO (AP) - Blue Jays right-hander Alek Manoah has been honored with a sportsmanship award for defending teammate Alejandro Kirk after the catcher was criticized online for his weight.

Manoah received a roughly $73,000 ($100,000 Canadian) sponsorship prize and immediately donated it to KidSport, a Canadian nonprofit that gives children the opportunity to participate in organized sports.

Earlier this month, Manoah reacted angrily when Montreal radio host Matthew Ross tweeted that Kirk was “embarrassing the sport” because of his weight and figure. Kirk, a first-time All-Star this season, is 5-foot-8 and 245 pounds, according to his bio on MLB.com.

Ross was responding to a video highlight of Kirk scoring from first base in a game Sept. 13 against Tampa Bay. Toronto won 7-2, splitting a doubleheader against the Rays.

Manoah, who has thrown to Kirk in all but one of his starts this season, fired back at Ross, urging him to “ step aside from the keyboard.”

“Go ahead and tell that 8 year old kid who is 10lbs over weight that he should quit now,” he wrote. “Let KIRK inspire those kids to continue to chase their dreams and chase greatness.”

Ross subsequently deleted the tweet and shut down his account before issuing a public apology for his remarks.

To recognize Manoah's actions, Dove Men+Care announced a sponsorship honoring athletes for their sportsmanship and named Manoah as the first recipient.

Manoah and Kirk were both selected to the AL All-Star team for the first time this season.