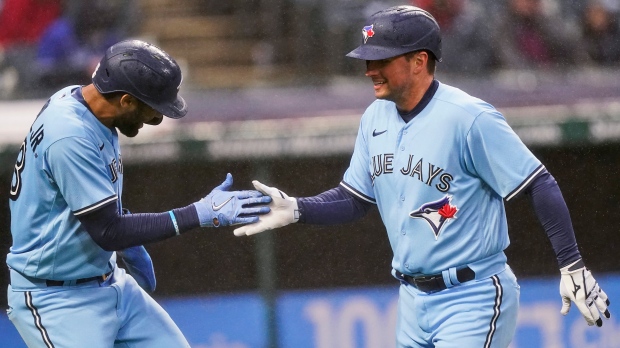 Toronto Blue Jays' Joe Panik, right, is congratulated by Lourdes Gurriel Jr. after Panik hit a two-run home run during the third inning of the team's baseball game against the Cleveland Indians, Friday, May 28, 2021, in Cleveland. (AP Photo/Tony Dejak)

CLEVELAND (AP) - Hyun Jin Ryu regained his control after a rough first inning battling strong winds and Lourdes Gurriel Jr. and Joe Panik drove in three runs apiece, leading the Toronto Blue Jays over the Cleveland Indians 11-2 Friday night in a game called in the bottom of the seventh.

The game was played in winds gusting to 45 mph throughout, and a steady, blowing rain made conditions miserable for both teams, the umpires and fans.

Panik connected for a two-run homer in the third to make it 6-2 against Eli Morgan (0-1), who may remember his major league debut more for the lousy weather than anything else.

Panik had four hits and Santiago Espinal also had three RBIs for the Blue Jays.

With Indians right field Josh Naylor leading off the seventh, crew chief Bill Miller watched two pitches get thrown before waving for the grounds crew. After a 36-minute delay - the tarp didn't come out for 30 minutes - the game was finally called.

It was the first meeting between Toronto and Cleveland since 2019.

Ryu (5-2) allowed two runs - both in the first - and four hits in five innings. The left-hander shook off a 32-pitch first to win his fourth straight decision. He walked two in the opening inning after not allowing more than one walk in any of his first nine starts in 2021.

Helped by a whipping wind which made everything hit in the air an adventure for outfielders, the Blue Jays scored four runs in the third off Morgan, who was recalled earlier in the day from Triple-A Columbus.

Randal Grichuk hit an RBI single. Gurriel Jr. doubled in a run with a shot to right that fooled Naylor and Panik crushed his first homer since Sept. 16 into the teeth of the wind, which stretched the U.S. and Canadian flags to the limit on their poles beyond center field.

The Blue Jays added three more runs in the fifth on Gurriel's two-run double and an RBI single by Panik.

The 25-year-old Morgan was tagged for six runs and eight hits in 2 2/3 innings.

Eddie Rosario's two-run single gave the Indians a 2-0 lead in the first. But Toronto quickly tied it in the second on Espinal's RBI groundout and a flyball to left-center by Danny Jansen that changed direction and turned into a double.

Indians manager Terry Francona, who picked up his 700th win with Cleveland on Thursday, will leave the club over the weekend to attend his youngest daughter Jamie's wedding in Newport, Rhode Island.

“I'm wearing a tux,” said Francona, who is still slowed by offseason toe surgery. “I got a brand new boot and everything for the wedding.”

Bench coach DeMarlo Hale will fill in for Francona, who will be back in time for Cleveland's doubleheader on Monday against the White Sox.

Indians: OF Jordan Luplow went on the 10-day injured list with an ankle issue that has bothered him since spring training. He underwent an MRI to determine the extent of the injury.