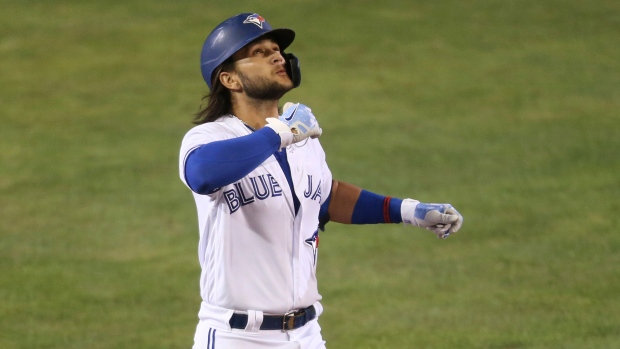 BUFFALO, N.Y. - Toronto Blue Jays shortstop Bo Bichette singled and scored in his return to the lineup Saturday against the New York Mets after missing 27 games with a knee injury.

Bichette started at shortstop against the Mets in his first game since Aug. 15, and extended his hitting streak to 10 games. The shortstop is batting .354 this season.

The 22-year-old hurt his knee in what he called a “freak incident” while stretching in the on-deck circle in the first inning of that Aug. 15 game against the Tampa Bay Rays.

Meanwhile, Blue Jays rookie catcher Alejandro Kirk got a hit and scored in his big league debut. Kirk, a 21-year old catcher who hadn't played above Single-A, singled in the sixth inning. He also drew a walk.

He told reporters on a Zoom call before Saturday's game that he expects to play regularly at shortstop over the last two weeks of the regular season and into their playoff push.

The Blue Jays went 17-10 after Bichette's injury to jump into second place in the American League East behind Tampa and ahead of the New York Yankees.

Bichette said it was fun to watch his team do so well during his absence.