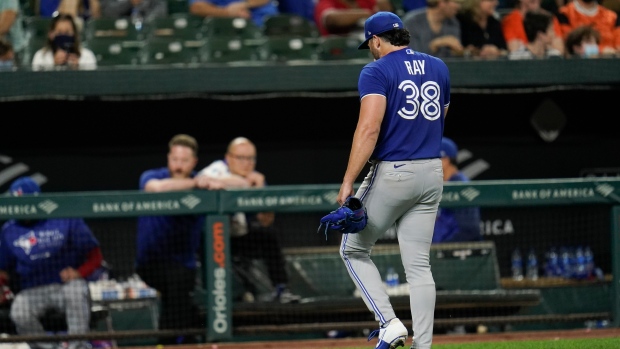 Toronto Blue Jays starting pitcher Robbie Ray heads to the dugout after being pulled from the game during the fifth inning of a baseball game, Friday, Sept. 10, 2021, in Baltimore. (AP Photo/Julio Cortez)

Anthony Santander also had a three-run shot in the seventh inning off Julian Merryweather (0-1) that traveled 423 feet and gave Baltimore the decisive lead.

The Orioles have won five games in September, one more than they won in August.

“For the last two weeks, we have been playing better baseball, being aggressive, being competitive,” Santander said through an interpreter. “We're aiming to finish the season strong.”

It was an all-around tough night for Ray, who got into an exchange with Orioles manager Brandon Hyde in the second inning. Hyde yelled at Ray during an at-bat by Richie Martin. After Martin struck out, Ray motioned for Hyde to come out of the dugout, but the situation did not escalate any further.

“I'm not going to waste my time with someone that doesn't get in the box,” Ray said. “I don't have the time of day.”

“I wish that I had handled it differently than I did,” Hyde said.

Ray, who was the American League Player of the Week, allowed three runs and a season-high eight hits and eight strikeouts over 4 1/3 innings. It was his shortest outing since June 18 against Baltimore.

“I felt really good coming into this game,” Ray said. “The ball was coming out really well. They just battled.”

In the sixth, Orioles reliever Fernando Abad appeared to throw his shoulder into Lourdes Gurriel Jr., who was about to score on throwing errors by Jahmai Jones and Kelvin Gutierrez that cut Baltimore's lead to 3-2. Marcus Semien followed with a double that tied the game.

“I was looking at the ball for the relay, and then I see Gurriel on the ground,” Toronto manager Charlie Montoyo said. “So I didn't even see how it happened.”

Conner Greene (1-0) got his first career win by throwing 1 2/3 scoreless innings and Cole Sulser picked up his seventh save,

Mullins had his eighth leadoff home run of the season, the second-most in franchise history behind Brady Anderson, who had 12 in 1996.

Rookie Chris Ellis made his fourth start with the Orioles and had another effective outing. He allowed one run and five hits with four strikeouts over five innings.

“We did a lot of really good things and it was a good win,” Hyde said.

Blue Jays: George Springer (left knee contusion) was back in the lineup Friday. He has been out since fouling a ball off his knee in the eighth inning of Monday's 8-0 win over the Yankees.â€¦ INF Cavan Biggio (back) and INF Santiago Espinal (hip) will not rejoin the Blue Jays this weekend in Baltimore. “We'll see how they feel next week,” Montoyo said. â€¦ RHP Ross Stripling (oblique strain) was activated from the IL and Kevin Smith was optioned to Triple-A Buffalo.

Orioles: RHP Matt Harvey (right knee inflammation) has been shut down for the rest of the season. “He's been an unbelievable team guy and veteran presence in the clubhouse and I just appreciate how he went about his business for us,” Hyde said. â€¦ RHP Jorge Lopez (right ankle sprain) has also been ruled out for the final month.

Blue Jays: LHP Hyun Jin Ryu (13-8, 3.77) will pitch the second game of a doubleheader. Toronto has not named a starter for the first game. “We have to make a move for that,” Montoyo. “I have an idea of who it's going to be.”

Orioles: LHP Keegan Akin will pitch one of the games of the doubleheader. Manager Brandon Hyde will wait until morning to announce the other starter.