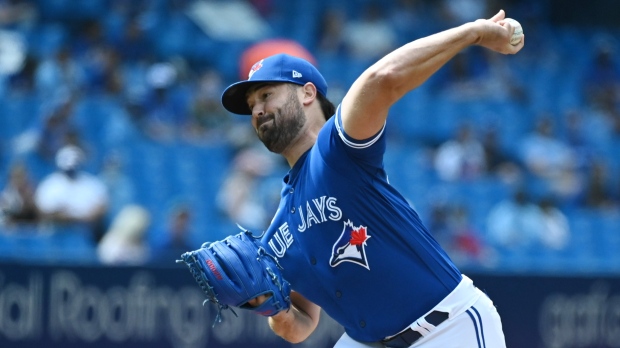 Toronto Blue Jays' Robbie Ray pitches in the first inning of a baseball game against the Cleveland Indians, in Toronto on Monday, August 2, 2021. THE CANADIAN PRESS/Jon Blacker

Toronto lefty Robby Ray laboured in his first outing in a Blue Jays uniform at the Rogers Centre on Monday in a 5-2, 10th-inning defeat against Cleveland.

The loss halted a four-game victory streak for Toronto (54-49), and three wins in a row start in its return to Rogers Centre for the first time in 22 months because of the COVID-19 pandemic.

Ray, 5-2 in his last seven starts and 9-5 overall this season, did not suffer the loss thanks to a two-run, game-tying blast from Vladimir Guerrero Jr., in the sixth inning. But Ray was not as sharp as usual. As a result, he had to deal with a bulging pitch count that hit 64 after only three innings.

“I haven't faced this team this year and I haven't really seen them,” he said. “They definitely made me work today. They didn't chase and they didn't swing and miss a whole lot.”

Cleveland hitters fouled off too many of Ray's early offerings and worked the Blue Jays lefty deep into the count with its early inning at-bats.

Cleveland (52-51) snatched a 2-0 lead in the third inning when it sent seven hitters to the plate, loading the bases with one out after singles from Myles Straw and Amed Rosario and a walk to designated hitter Franmil Reyes.

A single to right field from Harold Ramirez knocked in Straw, but Toronto outfielder Randal Grichuk threw out Rosario at home plate. However, Cleveland right fielder Oscar Mercado increased his team's lead to 2-0 with a single to left, scoring Reyes.

Ray managed six innings, allowing six hits with three walks and four strikeouts. But after 109 pitches (66 strikes), he was done for the day. Blue Jays manager Charlie Montoyo decided to push Ray out for the sixth inning after he struck out his final two batters in the fifth.

Ray now has 15 quality starts, tops in the American League.

Another newcomer, lefty Brad Hand, surrendered three runs in the 10th inning on a single from Rosario that scored the automatic runner on second to start the frame. Harold Ramirez then clubbed a homer off the left-field foul pole. Hand joined the Blue Jays after a trade last Thursday.

The Blue Jays failed to muster a late-game rally against Cleveland relievers, a concerning trend for the young Toronto lineup despite its gaudy offensive statistics.

“We're facing the best relievers in the game,” Montoyo said. “But for such a good-hitting lineup it's something we need to do better. Our hitting is so good we should be able to that better.”

“He was changing speeds well. It seems like we didn't get many good at-bats against him,” Montoyo said.

Blue Jays outfielder George Springer led off the sixth inning with a single to centre. With chants of M-V-P, M-V-P from most of the 14,653 fans at the Rogers Centre, Guerrero then smacked a 1-0 pitch into the left-field seats for the Blue Jays' MLB-leading 160th round-tripper.