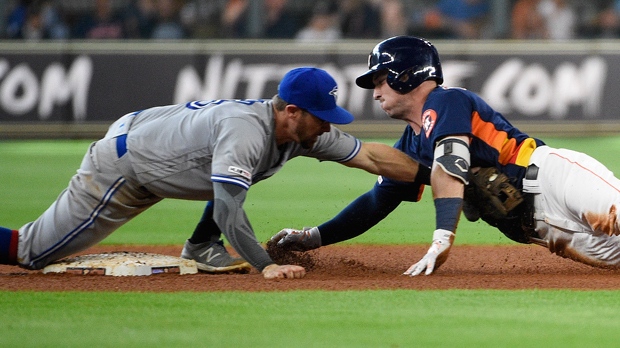 Houston Astros' Alex Bregman, right, is tagged out by Toronto Blue Jays second baseman Eric Sogard after trying to stretch an RBI single into a double during the fourth inning of a baseball game, Saturday, June 15, 2019, in Houston. (AP Photo/Eric Christian Smith)

The 21-year-old rookie from Cuba homered again, connecting for an upper-deck shot Saturday to send the Astros over the Toronto Blue Jays 7-2.

Alvarez got three hits, making him 8 for 17 in his brief career. He has driven in eight runs, scored eight times and also has drawn six walks.

“I'm probably having as hard a time describing him as you're having writing about him,” manager AJ Hinch said. “He's having an enormous impact for us, that goes without saying. It's been very impressive to watch him methodically go about his business as a much more experienced player than he is.”

Alvarez played left field after starting as the designated hitter in his first four games.

Jack Mayfield, a fellow rookie who had three doubles, played with Alvarez at Triple-A Round Rock.

“He's like a rookie inside a veteran's body,” Mayfield said. “He's a monster up there. The pitchers know what he's got already, and he's still getting all those hits and homers and everything.”

The 28-year-old Mayfield was 2 for 34 as a big leaguer before breaking loose.

“Once I got that first hit, it relieved some pressure,” Mayfield said. “I give credit to this team. Hitting is contagious and this team is hitting like crazy, so it definitely helps me a little bit to be confident in the box.”

Valdez had his second straight solid start since moving into the rotation. He gave up one run in seven innings in his first on Saturday against the Orioles.

Josh Reddick also homered for the AL West-leading Astros, who have stars Jose Altuve, George Springer and Carlos Correa on the injured list.

Clayton Richard (0-3) yielded five runs and seven hits in five innings. The left-hander struggled for a second straight outing after being tagged for seven runs in 2 2/3 innings in his last start Sunday against the Diamondbacks.

“It was a struggle the whole time,” Toronto manager Charlie Montoya said. “The one thing he had was he had that sinking action on his fastball, so he could always get double plays. His command wasn't there today, so it was a struggle.”

Mayfield hit an RBI double in the second and came around to score on an error to give the Astros a 2-0 lead.

Myles Straw hit an RBI double and Alex Bregman followed with an RBI single to increase the lead to 5-0 in the fourth. Straw added an RBI single in the sixth.

Brandon Drury had an RBI single, and Eric Sogard followed with a sacrifice fly in the fifth to cut the lead to 5-2.

Blue Jays: 3B Vladimir Guerrero Jr. (bruised left hand) was out of the lineup after being hit by a pitch in Friday's game. Guerrero took batting practice prior to the game. . RHP Nick Kingham was activated prior to the game and gave up Reddick's leadoff homer in the sixth. RHP Thomas Pannone was optioned to Triple-A Buffalo. .. RHP David Phelps (Tommy John) threw a bullpen session Saturday. .. RHP Jacob Waguespack (shoulder) is scheduled to pitch two innings Sunday for Buffalo. ... LHP Ryan Borucki (elbow) was expected to throw live batting practice Saturday in Florida.

Astros: 2B Jose Altuve (left hamstring strain) had the day off before continuing his rehabilitation assignment with Triple-A Round Rock on Sunday. Hinch said Altuve felt “really good” after playing Friday. ... RHP Collin McHugh (right elbow discomfort) will pitch again for Round Rock on Monday.. . CF Jake Marisnick (left knee discomfort) was out of the lineup Saturday after leaving Friday's game. “I think we have avoided a major issue,” Hinch said.

Blue Jays: RHP Trent Thornton (1-5, 4.78 ERA) will make his 15th start Sunday after allowing at least three runs in each of his last four outings.

Astros: RHP Brad Peacock (6-3, 3.42) starts Sunday looking to continue his recent success, which has seen him win four of his last five decisions.